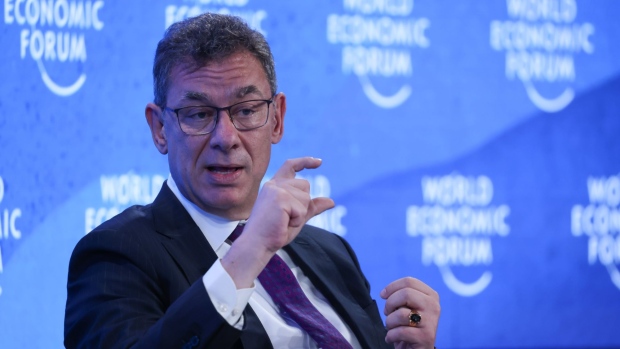 Albert Bourla, chief executive officer of Pfizer Inc., speaks during a panel session on day three of the World Economic Forum (WEF) in Davos, Switzerland, on Wednesday, May 25, 2022. The annual Davos gathering of political leaders, top executives and celebrities runs from May 22 to 26. , Bloomberg

(Bloomberg) -- Pfizer Inc. was ordered by US regulators to test the effects of an additional course of Paxlovid among people who experience a rebound in Covid-19 after treatment, putting the drug through further study as reports of the mysterious phenomenon continue to mount.

The company must produce initial results of a randomized controlled trial of a second course of the antiviral by Sept. 30, 2023, according to a letter from the regulator to Pfizer dated Aug. 5. The letter, which describes changes in Paxlovid’s emergency authorization, was confirmed by the Food and Drug Administration in an email.

The drugmaker is “working with the FDA to finalize a protocol to study patients who may be in need of retreatment,” and details will be provided when available, according to an email from Pfizer spokesperson Kit Longley. A formal plan for the clinical trial is expected to be finalized this month, the agency said.

Shown to reduce rates of hospitalization and death, a five-day course of Paxlovid has become the go-to treatment for high-risk people with Covid-19, far outperforming rival Merck & Co.’s molnupiravir. Since the spring, however, numerous patients have reported resurgences in either viral infection or symptoms, or both, after their initial course.

In late July, President Joe Biden tested positive for Covid-19 again after taking Paxlovid, forcing him to go into isolation for a second time, when he suffered an occasional cough. Top medical adviser Anthony Fauci also went through Covid rebound after Paxlovid treatment.

In a separate Aug. 5 memo explaining the changes to the drug’s authorization, the FDA said that it initiated discussions with Pfizer in May about a new retreatment study after widespread media reports of rebound and as well as of doctors already prescribing second courses of Paxlovid.

The timeline for the company’s results seems long for such a widely used drug, said Paul Sax, a Harvard Medical School infectious disease specialist at Brigham and Women’s Hospital in Boston.

“I’m hopeful that further prospective data will give us a better sense of risk factors and consequences of rebound, since obviously it’s common, frustrating, and of uncertain clinical consequences,” he said in an email.

Pfizer Chief Executive Officer Albert Bourla himself recommended a repeat course of the drug for people suffering rebound after the recurrences were first reported earlier this year. In cases where virus levels rebound, “then you give a second course, like you do with antibiotics, and that’s it,” he said in May.

The FDA said soon afterward that there was “no evidence” that the repeat treatment would help. In late July, Pfizer said it was working with the US to plan a trial in patients with rebound.

Exactly what causes rebound and how significant it is medically is unclear. While Pfizer has said the viral load rebound phenomenon only occurred in about 2% of people treated in its clinical trials of the drug, and that the drug was likely not responsible, some more recent studies have found higher numbers.

In one study of the health records from more than 11,000 people who received Paxlovid by researchers led by Rong Xu of Case Western Reserve’s Center for Artificial Intelligence in Drug Discovery, over 5% had a rebound in infection within a month. Almost 6% saw their symptoms return in the same period, according to results of the study posted on the preprint server medRxiv.org.

Meanwhile, there’s also evidence that rebound can occur in untreated Covid patients. About 1 in 12 such people experienced a rebound of positive viral tests, according to data from a real-world study by researchers at Harvard Medical School and other institutions posted Aug. 2 on the preprint site. Another 27% of patients in the study reported a rebound in symptoms after they had started to improve, the study found. There were few cases where people experienced a rebound in both symptoms and viral load.

The company expects about $22 billion in full-year sales of Paxlovid. That and the Covid vaccine it makes in partnership with BioNTech SE have transformed the New York-based drugmaker, which is predicting as much as $102 billion in overall revenue for the year.