COVID-hurt stocks will be fully recovered within a year if the vaccine goes ahead: Portfolio manager

(Bloomberg Opinion) -- Last week I wrote that based on clinical trial math, the earliest looks at COVID-19 vaccine data were less likely to succeed. I've never been happier to be wrong. Pfizer Inc. and BioNTech SE announced Monday that their vaccine candidate prevented over 90 per cent of infections in an early look at results from their 44,000-person clinical trial.

It's fantastic news and a historic scientific accomplishment. Not only do we have the first effective vaccine, but the data also looks robust. Instead of evaluating the shot at the first possible moment, Pfizer waited for more data, which gives weight to the impressive results.

There are still unknowns about the vaccine, and with limited supplies available until next year and two shots needed to complete treatment, it won't end a rampant pandemic overnight. The news does, however, substantially boost the chances of a quicker and easier resolution. Investors are justified in taking Pfizer shares and the broader market higher.

Trials like Pfizer's compare the number of confirmed COVID cases among those who get the vaccine to those that take a placebo. The initial plan was to analyze the data after just 32 cases. But after discussions with the Food and Drug Administration, the companies decided to wait until there were 94. Their patience only modestly delayed results and makes it far easier to trust in the vaccine’s considerable promise. 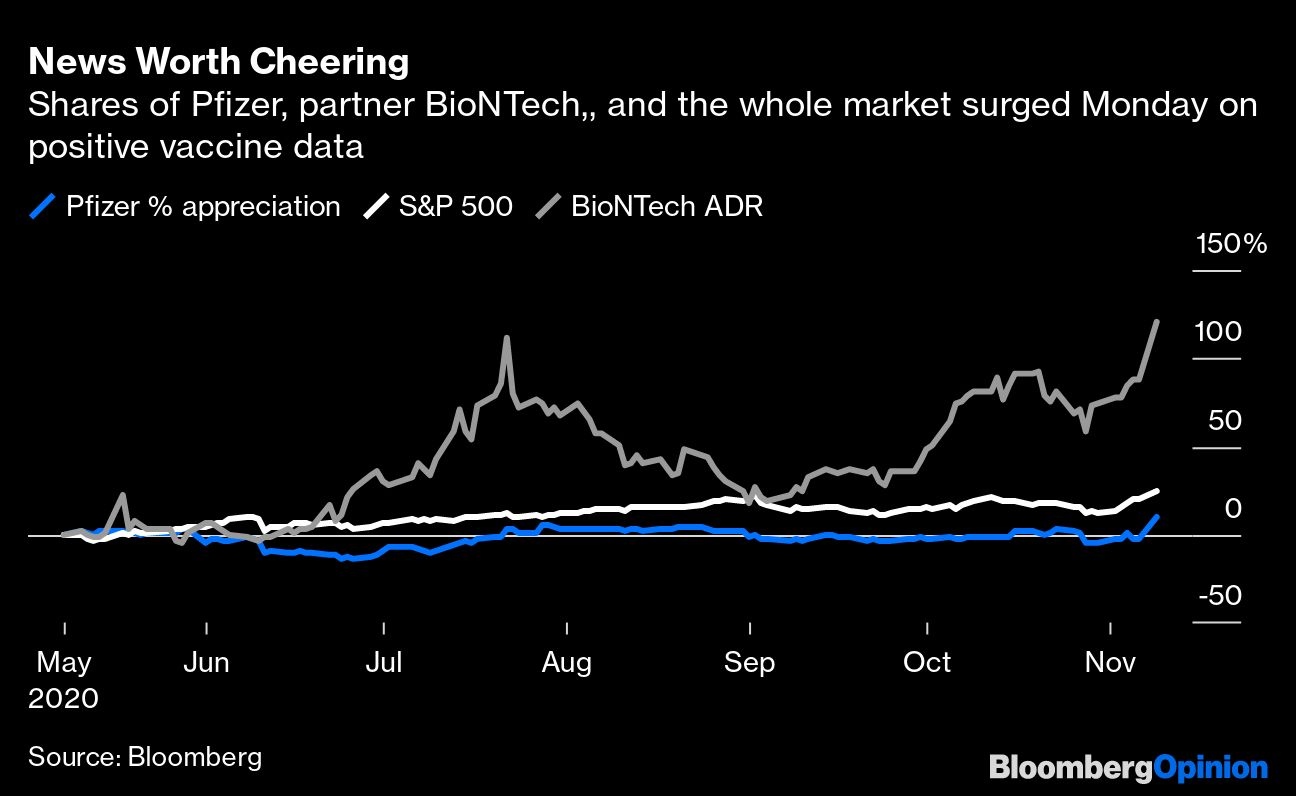 Data collection will continue; the FDA requires at least two months of safety follow-up from most participants before considering an emergency use authorization. That data should be available later this month. Absent surprising side effects, quick authorization is more than likely. After all, the agency's bar for efficacy is just 50%.

Some questions remain. We still don't know how well the vaccine works in subgroups such as the elderly. Nor does the initial press release discuss the extent to which the vaccine prevents severe disease, the ability to transmit the virus, or how long its protection lasts. It’s also unclear what the result may mean for other vaccine candidates.

Thankfully, there's reason for optimism on both fronts. An immune response strong enough to derail disease in so many patients may well be highly effective in other ways. As for other vaccines, Monday’s news bodes well for Moderna Therapeutics Inc.'s candidate, which uses the same cutting-edge mRNA technology as Pfizer's. (Moderna is due to reveal data relatively soon as well.) Many others in development aim at the same target — the coronavirus's signature “spike protein.”

With efficacy established, the big problem is availability. Pfizer and BioNTech expect to produce 50 million doses worldwide by the end of the year, enough for 25 million to get the required two shots. Manufacturing will ramp up, but it will take multiple vaccine candidates to get enough of the global population vaccinated to end the threat of Covid-19. It remains crucial that other vaccine efforts succeed.

It's not time for anyone to let up their guard. COVID-19 cases continue to surge and hospitalizations are also rising, threatening to strain health systems. Once a vaccine is ready, distributing it will take another historic effort. But make no mistake: Pfizer’s vaccine news marks a major step forward in the COVID-19 fight.