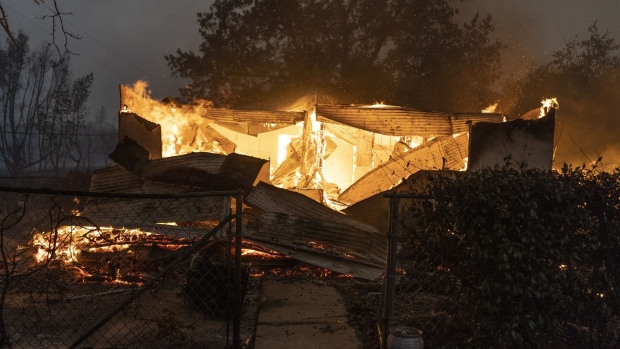 A burning property is seen during the Zogg fire near the town of Ono in Shasta County, California, U.S., on Sunday, Sept. 27, 2020. In Shasta County, the new, fast-spreading Zogg fire burned 7,000 acres by Sunday evening, prompting evacuations, according to the San Francisco Chronicle. , Bloomberg

(Bloomberg) -- PG&E is criminally liable for the 2020 Zogg Fire near California’s northern border which killed four people, according to a post on Facebook attributed to Shasta County District Attorney Stephanie Bridgett.

A final decision as to the nature and grade of charges hasn’t yet been made, according to the post on the Shasta County District Attorney’s Office Facebook account. A decision whether to file charges will be made before the Sept. 27 anniversary of the blaze, according to the statement. The fire burned more than 56,000 acres.

“This fire caused the deaths of four people and damaged numerous homes and other structures, killed wildlife and harmed our community,” the D.A.’s office posted. ““I hope this information brings awareness to the importance of fire prevention during the current drought and severe wildfire season.”

PG&E declined to immediately comment on the D.A.’s statement.

The judge overseeing PG&E’s criminal probation and federal prosecutors have previously said evidence suggested the Zogg Fire was caused by a tree falling on the utilitiy’s equipment. PG&E has said it expects to take a $275 million pretax charge in connection with the fire, a figure that could increase substantially with the costs of defending another criminal case.

The announcement comes as PG&E also revealed that its equipment might have been responsible for the Dixie fire, California’s largest this year. PG&E was driven into bankruptcy in 2019 after its equipment started catastrophic fires that killed more than 100 people and destroyed more than 22,000 structures. The company emerged from bankruptcy last year.

Since it ignited July 13, the Dixie fire has burned more than 217,000 acres in Butte and Plumas counties, and is about 23% contained, according to the California Department of Forestry and Fire Protection, or CalFire.