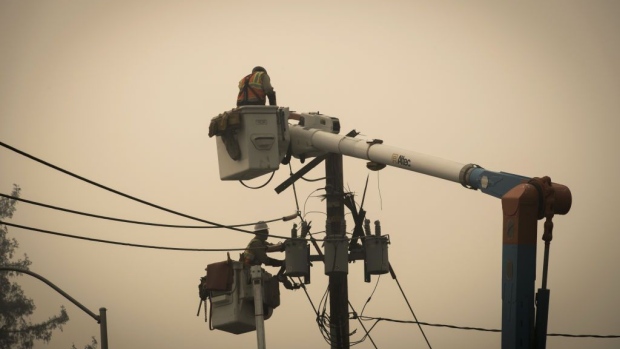 Pacific Gas & Electric Co. (PG&E) workers repair a transformer in Paradise, California, U.S., on Thursday, Nov. 15, 2018. The number of acres burned in the blazes -- including the Hill and Woolsey fires in Southern California, and the Camp fire in Northern California, which has killed at least 48 people and destroyed the city of Paradise -- already is higher than the total burned in wildfires last year, A.M. Best Co. wrote in a report late Tuesday. , Photographer: Bloomberg/Bloomberg

(Bloomberg) -- PG&E Corp. is finding it very costly to buy fire insurance after wildfires triggered by its power lines sent the company into bankruptcy and left it paying $25.5 billion for claims. It’s hoping customers will foot the bill.

The San Francisco-based company had to cough up about $750 million to secure $1.4 billion of liability coverage for the next 12 months, with only a little more than half of that dedicated to potential fire claims, Chief Financial Officer Jason Wells told investors Thursday during a second-quarter earnings call.

“That is a fancy way for saying nobody would sell them wildfire insurance,” said Andy DeVries, a utility analyst for research firm CreditSights.

PG&E will seek to recover its insurance costs through customer rates, it said in a filing. However, the company noted that it remains unclear whether PG&E “will be able to obtain full recovery of its significantly increased insurance premiums,” or will be able to “obtain wildfire insurance at a reasonable cost in the future, or at all.”

If there is a silver lining, it’s that PG&E can now dip into a wildfire insurance fund to help pay for any future claims because it exited bankruptcy by a state deadline. However, it can only tap into the state funds if damages exceed $1 billion.