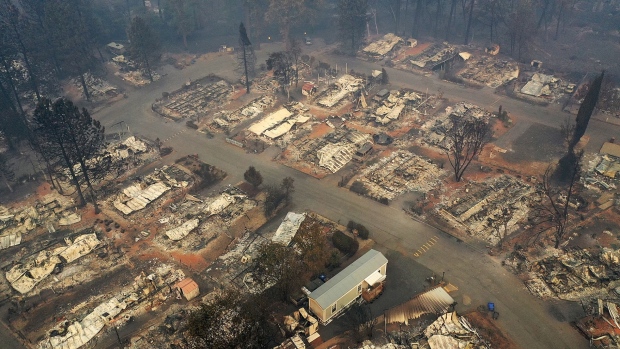 A Cal Fire firefighter monitors a burning home as the Camp Fire moves through the area on November 9, 2018 in Magalia, California. , Getty Images

(Bloomberg) -- California investigators have determined that equipment owned by PG&E Corp. caused the deadliest wildfire in state history. Shares slid as much as 5.9 percent in after-markets trading.

The California Department of Forestry and Fire Protection said Wednesday the Camp Fire, which broke out in November 2018, “was caused by electrical transmission lines owned and operated by Pacific Gas & Electric.”

The news came just as PG&E's new chief executive officer, Bill Johnson, began testifying at a state legislative hearing in Sacramento. The power giant filed for bankruptcy in January citing more than $30 billion in potential liabilities from the Camp Fire and other blazes. It has meanwhile been cleared of blame for some of the fires that tore across Northern California in 2017.

The Camp Fire burned a total of 153,336 acres, destroyed the town of Paradise, California, and was blamed for 85 deaths.

Under California law, utilities including PG&E and Edison International may be held liable for costs if their equipment is found to have caused a fire, even if they followed safety rules.

(Updates with shares in first paragraph)

--With assistance from David R. Baker.

To contact the editors responsible for this story: Lynn Doan at ldoan6@bloomberg.net, Joe Ryan, Margot Habiby