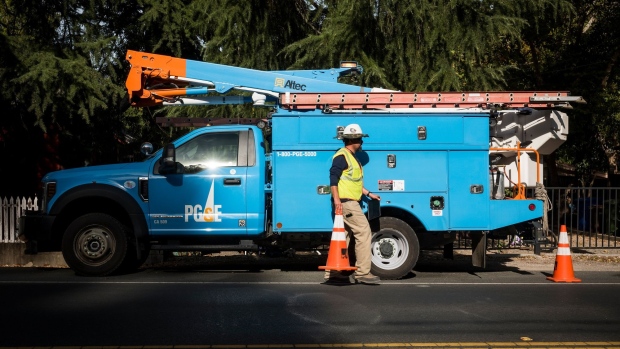 A PG&E Corp. troubleman first responder moves a safety cone in Calistoga, California, U.S., on Thursday, Oct. 24, 2019. In a deliberate blackout designed to keep power lines from igniting wildfires, PG&E and other utilities have cut service to nearly 200,000 homes and business in shutoffs that could eventually affect 1.5 million people as wind storms threaten to knock down power lines. Photographer: David Paul Morris/Bloomberg , Bloomberg

(Bloomberg) -- PG&E Corp. is nearing a deal with a group of creditors led by Pacific Investment Management Co. and Elliott Management Corp. that would entitle them to a mix of equity and new debt if they scrap their rival restructuring plan, people familiar with the matter said.

The California power giant held discussions with the creditors ahead of a bankruptcy court hearing on Tuesday. PG&E lawyer Stephen Karotkin said during the brief hearing that the two parties were involved in “constructive negotiations.” A deal hasn’t yet been struck and the talks may still break off, people familiar with the situation said, asking not to be identified because the talks are private.

A spokesman for the creditors didn’t immediately respond to a request for comment. PG&E said in a statement that it has been holding discussions with stakeholders on its reorganization and hopes “to make progress over the next week.”

A deal with bondholders would leave California Governor Gavin Newsom as the last major obstacle to PG&E’s restructuring plan. The company has been trying for months to craft a proposal that would keep shareholders from being wiped out while paying $13.5 billion to wildfire victims, who blame the company for their losses. The state has set a deadline of June 30 for the utility to emerge from bankruptcy if it wants to participate in an insurance fund that would shield it from future catastrophic wildfire losses.

Under the deal being negotiated, the creditors’ investment in the company would replace some of the exit financing that PG&E is proposing as part of its restructuring, the people said. Bonds with a coupon below 5% would be reinstated as part of the agreement being hammered out, and those above 5% would be revised to 4.75% through a mix of 10-year and 30-year bonds, they said.

The creditors would be given the right to participate in the company’s financial backstop commitments, a move that could hand them a part of the equity financing in the deal, the people said.

To contact the reporters on this story: Scott Deveau in New York at sdeveau2@bloomberg.net;Steven Church in Wilmington, Delaware at schurch3@bloomberg.net