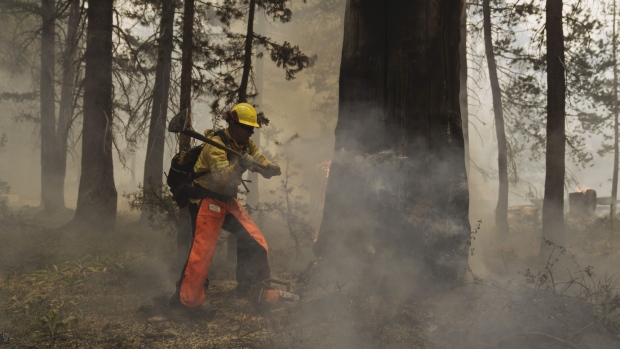 A firefighter uses an axe on a burning tree during the Caldor Fire in Christmas Valley in South Lake Tahoe, California, U.S., on Friday, Sept. 3, 2021. The Caldor Fire, which ignited Aug. 14 has burned at least 212,907 acres, or more than 332 square miles, and containment stood at 29% as of Friday, Cal Fire said in its morning update. Photographer: Eric Thayer/Bloomberg , Bloomberg

(Bloomberg) -- PG&E Corp. said it is planning to cut power to some customers in parts of Northern California as soon as early Monday to prevent its live wires from sparking wildfires during gusty winds.

The California utility giant said it will likely turn off electricity to about 7,100 homes and business in ten counties, including areas of Napa County and hills west of Sacramento, according to a post Sunday on PG&E’s website.

Wildfires have ravaged the western U.S. this summer amid a severe drought that has left forests and hillsides bone dry. A fast-moving fire that started in the hills east of Sacramento forced residents of the resort town of South Lake Tahoe to evacuate ahead of the Labor Day weekend. That blaze, called the Caldor Fire, has been largely contained.

Another blaze burning in California’s Sequoia National Park is threatening a famous grove of old-growth giant sequoias. Firefighters wrapped the base of the General Sherman Tree, the world’s largest by volume, along with other massive trees in the park with protective aluminum sheets as a precaution.