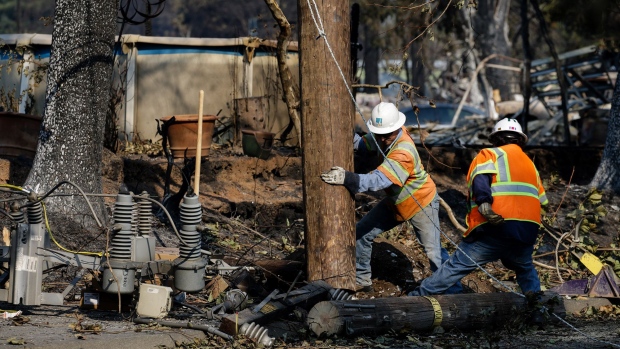 PG&E Corp. shares plunged 31 per cent as it grappled with a court ruling that threatens to put the fate of the bankrupt power giant in the hands of outsiders and perhaps wipe out the value of the stock.

The shares dropped US$3.43 to US$7.55 at 9:42 a.m. in New York. U.S. Bankruptcy Judge Dennis Montali on late Wednesday stripped the utility of exclusive control over its reorganization process.

The decision escalates an already-heated battle for control of the largest utility bankruptcy in U.S. history. Montali agreed to let bondholders including Pacific Investment Management Co. and Elliott Management Corp. pitch their own restructuring plan alongside PG&E’s, so they can both come up with ways the utility could deal with an estimated US$30 billion in wildfire liabilities.

The damages, tied to blazes that its equipment ignited, forced the utility to file for Chapter 11 in January. PG&E is simultaneously trying to manage an unprecedented blackout it engineered to prevent new fires.

The loss of exclusivity is the latest twist in a massive bankruptcy case that has already attracted some of the biggest names in the financial world. A group led by Pimco and Elliott has devised a plan that would all but obliterate the stake of current shareholders in the utility.

“In the worst case, the competing plan could win and completely wipe out current shareholders,” Greg Gordon, an analyst at Evercore ISI, said in a research note. “In other words, zero is possible.”

Immediately after Montali issued his ruling Wednesday, PG&E shares plunged by as much as 25 per cent. It hit just as PG&E was cutting power to hundreds of thousands of homes and businesses in Northern California in the first phase of an orchestrated shutoff designed to keep its power lines from igniting blazes.

The creditors, including the fire victims, have “spoken loudly and clearly that they want their” proposal to be considered, Montali said in his ruling. While PG&E’s plan is “on track as well as can be expected,” he wrote, so is the competing version from creditors.

The court denied requests by other parties to let them offer recovery plans, too.

“We are disappointed that the Bankruptcy Court has opened the door to consideration of a plan designed to unjustly enrich Elliott and the other ad hoc bondholders and seize control of PG&E at a substantial discount,” PG&E said in a statement.

Under bankruptcy law, a company has a limited amount of time to develop a reorganization plan and persuade creditors to vote in favor of it. Initially, no other competing proposals are allowed, so the bondholders needed permission from Montali before they could proceed. It’s unusual for a bankruptcy judge to grant such a request.

“It’s a big deal, because now the shape of the reorganization is no longer in existing management’s hands,” said Stephen Lubben of the Seton Hall University School of Law. “Whoever can persuade a critical mass of creditors, along with the regulators, that they have a good way forward will win. That could result in a very different plan than management envisioned when they went into Chapter 11.”

PG&E filed for bankruptcy on Jan. 29 to address liabilities resulting from a series of devastating fires that tore through Northern California in 2017 and 2018. The effects have been rippling through millions of ratepayers, hundreds of creditors, thousands of workers and the state’s political system.

The company has argued that ending its exclusive control before the company figures out its exact wildfire liabilities would “lead to further distraction, costs and waste” and would jeopardize the company’s chances of exiting bankruptcy by June 2020, a deadline set by the state.

“One plan emerging as confirmable is a very acceptable outcome,” Montali wrote. “And if both plans pass muster, the voters will make their choice or leave the court with the task of picking one of them.” He directed the noteholders to file their plan by Oct. 17.

The San Francisco-based utility previously said it has already lined up US$34 billion in debt financing for a reorganization. The company has also received more than US$14 billion in equity commitments. It has blasted the plan by Elliott and Pimco, saying it would lead to an “unjustified windfall” of billions of dollars for creditors at the expense of shareholders and utility customers.

Noteholders, meanwhile, said their efforts wouldn’t delay the bankruptcy case. They’ve joined forces with wildfire victims to pitch a plan that would pay out US$25.5 billion to victims and their insurers. Their campaign to end PG&E’s exclusive control was supported by the official committee of unsecured creditors, labor unions and fire victims.

Montali had ruled in August that PG&E should retain exclusive control over its restructuring and said last week that the group led by Pimco and Elliott would have to explain “what has changed in such a short period of time to justify reversing course.”