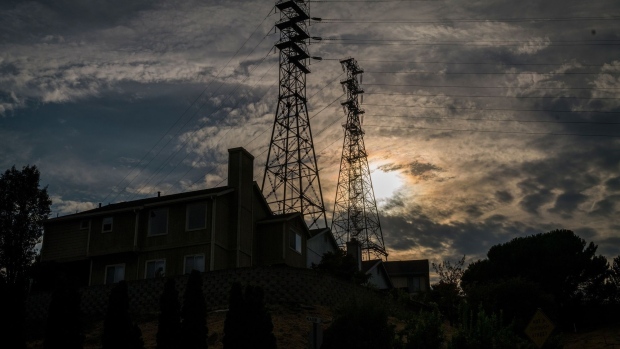 Power lines stand in Crockett, California, U.S., on Monday, Aug. 17, 2020. As many as 10 million Californians were supposed go dark on Monday in an unprecedented series of rolling blackouts designed to save the power grid from the worst heat wave in 70 years. But temperatures fell, people turned down their air conditioners and utilities called off the outages. Photographer: David Paul Morris/Bloomberg , Bloomberg

(Bloomberg) -- PG&E Corp. said it will likely cut power starting early Thursday to about 16,000 customers in 12 counties across northern California to prevent live wires from sparking wildfires during windy conditions.

The California utility giant reduced the scope of its blackouts from an earlier estimate of about 29,000 customers, according to a posting on its website. The shutoffs will start ahead of dry, gusty winds that are forecast to return to the region, prompting the National Weather Service to issue a red flag warning for Thursday in the Sacramento valley and nearby mountain ranges.

PG&E restored power on Tuesday to about 25,000 customers who had been blacked out on Monday during an offshore windstorm. PG&E has been working to reduce the size and scope of its controversial shutoffs that have been used to reduce the risk of its equipment starting wildfires.