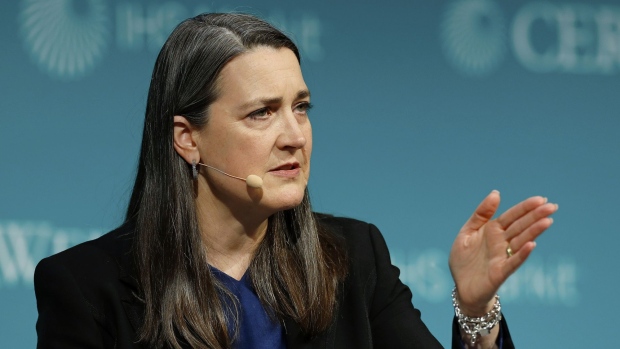 The state her electric utility serves, California, is growing hotter and drier, and it frequently catches on fire. Too often, PG&E’s power lines have provided the spark. Years of deadly blazes triggered by the company’s equipment leveled neighborhoods from Napa Valley to the Sierra Nevada foothills and finally drove PG&E into bankruptcy in 2019. To get back out, PG&E had to pay $25.5 billion in lawsuit settlements—and sell its historic San Francisco headquarters to raise cash.

Now California’s fire season has arrived early. PG&E has spent the last three years trying to harden its system, installing insulated wires and stronger poles, and shutting off power lines altogether when fire danger grows high. Poppe, who joined PG&E in January, knows that she will be judged on how well she and the utility to responds to fires and other climate-related disasters.

“We can’t lament the conditions—we just need to stay about the business of getting ready,” said Poppe, in an interview. “I feel, actually, really good about it.”

Poppe, 53, took an odd route to PG&E. She spent 15 years with General Motors, making cars that ran on fossil fuels, before stints at two Michigan utilities with coal-fired power plants. Hiring some of former Michigan Governor Jennifer Granholm’s assistants helped convince her to become, as she said, a “recovered climate denier.” She closed seven coal plants by the time she resigned as the chief executive officer at CMS Energy to join PG&E.

“I’ve become a bit of a zealot in my conversion,” Poppe said.

In PG&E, she said she found an organization that had become expert at responding to disasters but needed to do better at preventing them. Some of PG&E’s fire-prevention steps have strained relationships with its customers, particularly its “public safety power shutoffs” – intentional blackouts to stop powerlines from sparking flames. One of her predecessors, former chief executive Bill Johnson, alarmed and dismayed Californians by saying PSPS events would likely be needed for the next 10 years, as PG&E fire-proofed its grid.

They may have to become a permanent part of PG&E’s toolkit, Poppe said. “When you look at drought conditions, even with a hardened system, will we need to exercise this very counterintuitive method? Maybe.”

She wants to make them less intrusive. The company has installed about 980 “sectionalizing” devices that can isolate portions of the grid, shrinking the size of blackouts. PG&E also is installing microgrids to power communities that otherwise might lose electricity in a PSPS event.

“My goal is to make PSPS invisible,” Poppe said. In the long term, she hopes technologies like batteries and electric cars will step in to provide power to consumers when the utility deploys shutoffs.

California last year also suffered rolling blackouts, when electricity demand nearly outstripped supply during a punishing heatwave. Poppe said the company has been signing up extra power supplies, has new grid-scale batteries that can supply power in an emergency, and has been holding back use of its hydropower dams so that they’ll still have water in their reservoirs when the hottest months arrive.

“We have a bigger cushion than we had last year,” she said. “I would just suggest that conditions change all the time, and as we’re observing climate change, we’re preparing for worse conditions than in the past… The system just has to continue to evolve and be more resilient.”

Unlike some of in her industry, Poppe doesn’t dismiss President Joe Biden’s goal of a carbon-free electrical grid by 2035, or California’s aim of a carbon-neutral economy by 2045. PG&E, she said, is preparing a 10-year roadmap to show how it will get there. PG&E’s own energy mix is currently 85% greenhouse gas free, although part of it comes from the Diablo Canyon nuclear plant scheduled to close in 2025.

“I believe in breakthrough outcomes,’’ she said.

Poppe will still have to deal with PG&E’s troubled past. State regulators and a federal judge overseeing the company’s criminal probation have found fault with the company’s fire prevention work. In April, the California Public Utilities Commission placed the company under enhanced oversight because the company failed to prioritize tree-trimming for its highest-risk power lines last year.

PG&E also is facing 33 criminal charges for starting the Kincade Fire in Sonoma County in 2019 that burned more than 100 buildings. And the state has sent its report blaming PG&E for causing the Zogg Fire in 2020 to the Shasta County District Attorney’s office to determine if criminal charges should be filed.

Meanwhile, the company’s stock has languished since it emerged from Chapter 11 protection in July 2020. Investors remain concerned about the company’s exposure to wildfire risk.

Poppe said she was aware of the difficulties before taking the job. It’s worth it, she said, if she and her leadership team can make PG&E safer. “Everything we have ever done has prepared us for a time such as this, and we know that we’re making it better,” she said.