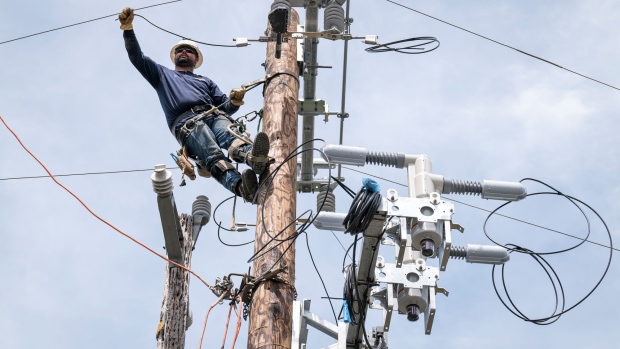 A Pacific Gas & Electric Co. worker moves a wire into place while installing a bypass switch in Yountville, California in April 2020. , Bloomberg

I was reading the new climate strategy report of one of the nation’s largest utilities, PG&E Corp., as one does, and stumbled over a term that stopped me in my tracks: “Scope 4 emissions.”

Now, here’s the thing: I’ve heard of Scope 1, 2 and 3 emissions before. They represent different pieces of a company’s climate pollution footprint. Maybe you’ve heard of them, too. After all, the U.S. Securities and Exchange Commission in March proposed a new rule that would require companies to disclose this and other climate information. The public comment period for the proposal closed last week.

Scope 1 and 2 were rigorously defined back in 2001 under the Greenhouse Gas Protocol, the established resource for emissions accounting developed by the World Resources Institute and the World Business Council for Sustainable Development. Scope 3, the most complicated one, came in 2011. The trio of terms was designed to capture the full sweep of a company’s climate footprint, according to WRI climate expert Pankaj Bhatia. This includes the direct emissions tied to a company’s activities (Scope 1), as well as the indirect emissions from a company’s energy use linked to making its product or delivering its services (Scope 2). It even includes pretty much any other indirect source of emissions associated with a company’s value chain (Scope 3).

So, what do Scope 4 emissions cover? And are they even real?

Bhatia provided a decisive answer to the second question: No, officially they are not an established category under the Greenhouse Gas Protocol. And Bhatia would know because he’s the program’s director and has been tracking these conversations for decades.

The fact that PG&E recently used this terminology was news to Bhatia and others interviewed for this article.

PG&E doesn’t dispute the term’s unofficial nature. Spokesperson Lynsey Paulo wrote in an email that in the recent report, “we acknowledge that ‘Scope 4’ is ‘an emerging term for categorizing emission reductions enabled by a company’ and present the term in quotations to distinguish it from Scope 1, 2, and 3 greenhouse gas emissions.”

She went on: “As a utility that provides gas and electric service to millions of Californians, we have dedicated programs and strategies to enable our customers to reduce their carbon footprint and our ‘Scope 4’ goals quantify our 2030 objectives.”

For example, by providing energy efficiency and electrification programs, the company said they can help customers save 48 million metric tons of carbon-dioxide equivalent by 2030. And by promoting and supporting the uptake of electric vehicles in the utility’s service area across California, the utility said it can save customers more than 58 million metric tons of CO₂ equivalent by the decade’s end.

PG&E seems to be using “Scope 4” as synonymous with what others more commonly refer to as “avoided emissions,” said Laura Draucker, Ceres’ director of corporate greenhouse gas emissions. This isn’t the first time this has happened, but it’s not common or widely accepted.

It’s not hard to see why a company would find this appealing. Scope 1, 2, and 3 emissions track just how sizable the company’s greenhouse gas emissions are. In a world barreling towards a dangerous 2.7° Celsius of warming due to the rising emissions in the atmosphere, these are almost always unflattering numbers.

Reporting on avoided emissions, in contrast, is a way to show something positive on the climate fight and connect it directly to consumers. Sharing “avoided emissions or reporting on climate benefits of the product you provide — that’s good information for a company to get out there,” Draucker said.

The CDP’s Simon Fischweicher took it a step further, saying such reporting could “send strong signals to investors that this company is investing in the low-carbon transition, not only in their own operations.” (The CDP does not currently track avoided emissions.)

But there’s also the potential such reporting could be a form of greenwashing. The goal of sharing such emissions, Draucker warned, should not be “to take pressure off their Scope 1, 2 and 3 emissions.”

To be sure, PG&E is tackling its greenhouse gas footprint. In the report, the company outlined its target to be a net-zero energy system in 2040, five years ahead of California’s similar climate goal. The company has also pledged to cut its Scope 1 and 2 goals by 50 percent from 2015 levels by the end of the decade, and to cut Scope 3 emissions by 25 percent from 2015 levels in that same time period. Still, the report didn’t offer a formula or detailed data behind PG&E’s “Scope 4” figures, making it hard to understand what’s fully counted as avoided emissions or how to compare that to any other companies that may follow its lead.

If companies do follow PG&E, Bhatia advises that they don’t adopt the “Scope 4” label and find something else instead.

“I think a corporate player who makes a move that goes into a new direction that could be considered outside the box, should be encouraged,” he said, but — and this was a big but — “at the same time, that direction is not the right direction.”

Zahra Hirji is a climate solutions reporter for Bloomberg Green.