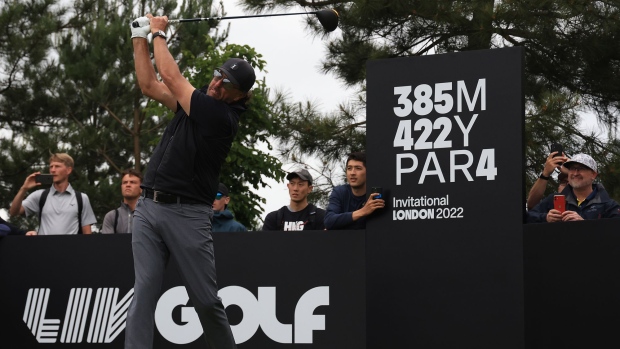 (Bloomberg) -- The PGA Tour fired back against LIV Golf in a court battle between the tournament organizers, claiming the Saudi Arabia-backed upstart is competing unfairly by luring players with millions of dollars to breach their contracts.

LIV has “reportedly” committed to paying $100 million to $200 million and offered exorbitant upfront fees to draw popular golfers to its tournaments, according to a countersuit the PGA Tour filed Wednesday.

The PGA Tour was responding to an antitrust complaint filed almost two months ago by 11 golfers calling it an “entrenched monopolist.”

“LIV’s orchestrated efforts to induce tour members to breach their contracts and prevent them from entering into any future contract with the tour are part of a deliberate effort to harm the tour,” the PGA Tour said.

PGA is seeking lost profits and damages for harm caused to its brand and reputation by LIV’s alleged interference with PGA player contracts.

Eight of the players who filed the original suit against the PGA Tour, including Phil Mickelson, Hudson Swafford and Talor Gooch, have since backed out of the fight. LIV, which initially wasn’t involved, is now leading the case against the PGA Tour.

LIV’s and the remaining players’ allegations are “baseless and entirely without legal merit,” the PGA Tour said in Wednesday’s filing. It is LIV that is competing dishonestly, the PGA Tour said.

PGA has brought the counterclaims in “a transparent effort to divert attention from their anti-competitive conduct,” set out in the complaint by LIV and the players, a LIV spokesperson said in an email. “We remain confident that the courts and the justice system will right these wrongs,” the spokesperson said.

A request by Gooch, Swafford and Matt Jones to lift their PGA Tour suspensions so they could participate in the FedEx Cup playoffs was rejected by a California federal judge in August. The judge concluded that their assertions about LIV’s superior business model undercut their claims of injury. But she said the antitrust issues at the heart of the case can’t be decided without more evidence and arguments.

A trial is scheduled for January 2024.

(Updated with LIV’s comment and relief sought by PGA)