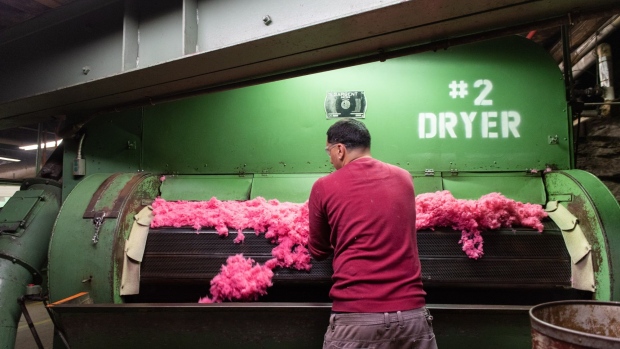 (Bloomberg) -- A gauge of manufacturing activity in the Philadelphia area unexpectedly expanded in August for the first time in three months, though the outlook remained weak.

Federal Reserve Bank of Philadelphia data on Thursday showed the index of manufacturers’ current assessment rose to 6.2, topping all estimates, from minus 12.3. Readings above zero indicated growth and the median forecast in a Bloomberg survey called for minus 5. A measure of business conditions six months from now remained negative for a third straight month.

The pickup in current conditions included stronger growth in shipments. The gauge of orders jumped about 20 points to minus 5.1, indicating bookings are still declining but at a slower pace. Delivery times improved, suggesting supply chains are normalizing.

The figures are at odds with other regional Fed data out earlier this week. A gauge of New York state factory activity plunged in August by the second-most in data back to 2001 amid sharp declines in orders and shipments. While the regional manufacturing figures can be volatile, the mixed results, paired with solid factory output in July, suggest the sector may not be weakening as quickly as some had feared.

The S&P Global US manufacturing index due next week will help provide a clearer picture of the health of manufacturing nationwide.

The Philadelphia Fed survey showed that 26% of manufacturers reported increased activity, while 20% noted a decrease.

Survey responses were collected Aug. 8 to 15 from manufacturers in Delaware, southern New Jersey, and eastern and central Pennsylvania.

The Philadelphia Fed’s index of prices paid dropped to the lowest level since December 2020, likely reflecting cheaper energy costs, though remained elevated. The prices received measure fell to the lowest since February of last year.

In response to questions about the outlook for consumer prices, the region’s factories saw a 6% increase in the next year -- down from 6.5% in May. The projected rate over the next decade also eased, to 3%.

While the outlook remained weak amid depressed orders, plans for hiring and capital investment strengthened.