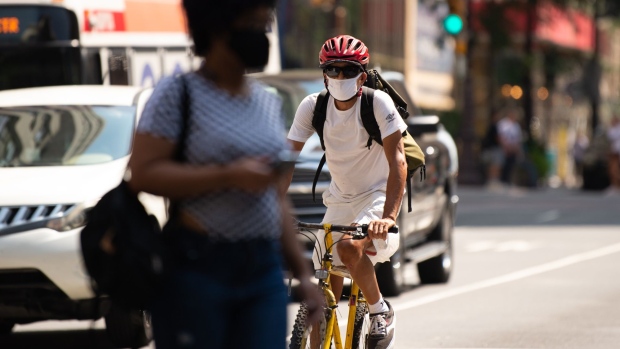 A cyclist wears a protective mask while riding in downtown Philadelphia, Pennsylvania, U.S., on Thursday, Aug. 12, 2021. The City of Philadelphia issued new mask mandates to protect against the Delta variant, requiring masks to be worn indoors and at large outdoor gatherings. , Bloomberg

(Bloomberg) -- Philadelphia’s return to a masking mandate is unlikely to catch on in other U.S. cities, highlighting a split among public health officials over how to contain future outbreaks of the virus.The City of Brotherly Love will make masks a requirement again in indoor settings starting on April 18, but Philadelphia is unique in breaking from guidance issued by the Centers for Disease Control and Prevention. The CDC shifted its recommendations earlier this year to emphasize hospitalizations over case counts, with universal masking only suggested at its highest risk level. The change has allowed many local government officials to continue reopening and relax restrictions even as the virus rebounds across some parts of the country, since hospitalizations remain low in most places.Indeed, by the CDC’s measurements, Philadelphia County remains low-risk. But the city made a commitment when it lifted mask mandates that it would reinstate them if another wave hit. That guidance still emphasizes case counts. So now that the BA.2 subvariant of omicron is increasing transmission, the masks are back.

The mask mandate is tied to the COVID Response Levels, and as COVID cases rise in Philly, we want to protect our most vulnerable residents. Wearing a mask around others is an easy way to do that. The sooner that we can stop this wave, the sooner we can get back to Level 1. (3/4)

If other cities ran their public health protocols the way Philadelphia does, we might already have seen mask mandates implemented elsewhere. In New York County, which encompasses Manhattan, the average of daily cases reported is 1,861, up from 1,572 at the start of April. That puts the county at “medium risk,” according to the CDC, with 238 cases per 100,000. The rising cases in Manhattan delayed the lifting of a mask mandate for kids under 5 and New York City’s health commissioner recommended a return to indoor masking — but it was not mandated.Philadelphia, meanwhile, is reporting an average of 142 new cases a day, up from 94 on April 4. The city’s average number of new cases per day remains below 225 and Covid hospitalizations are less than 100, but in the last 10 days cases have increased by more than 50%. Those metrics align with the city’s criteria for a return to indoor masking.There’s a lot of debate in public health circles about whether to emphasize cases or hospitalizations in policy decisions, but Philadelphia is winning acclaim for clearly communicating when it would reinstate masking, and sticking to that commitment. Some local health departments, such as in Chicago, have maintained their own systems for gauging risk, but unlike Philadelphia, those metrics do not immediately initiate mitigation strategies. Currently, Chicago is at a level of “substantial transmission,” according to city data, but officials have not yet indicated a return to masking or vaccine mandates. The city’s tiered risk system was last called on during the omicron surge and used to determine when it was appropriate to lift mask mandates in February following a drop in cases.

Great to see Philadelphia’s smart, data-driven mask policy“The indoor mask mandate is reinstated automatically when the city rises to Level 2, in which avg new daily case counts & hospitalizations are low but‘cases have increased by more than 50% in the previous 10 days.’” https://t.co/ey6e0hKipc

Some public health experts have warned that because the CDC’s guidance relies on hospitalizations and ICU capacity, which are lagging indicators of rising case levels, it could leave parts of the U.S. vulnerable to another surge. Despite omicron causing more mild symptoms than prior variants, hospitalizations still reached record-breaking highs earlier this year, including for kids. Monitoring case levels, they say, helps provide information about when public health measures should be put in place to prevent a large number of hospitalizations.