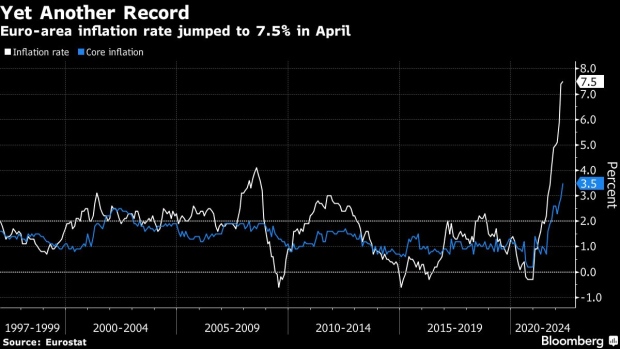 Philip Lane, chief economist at the European Central Bank (ECB), pauses during an interview at the ECB headquarters in Frankfurt, Germany, on Thursday, June 17, 2021. Lane signaled that policy makers may not have all the data they need by September to start shifting policy away from the current ultra-loose stance. , Bloomberg

(Bloomberg) -- The key question facing the European Central Bank isn’t whether it should raise interest rates from record lows, but how quickly it should do so, according to Chief Economist Philip Lane.

“The story is not the issue about are we going to move away from -0.5% for the deposit rate,” Lane told Bloomberg Television on Friday. “The big issue which we do need to still be data-dependent about is the scale and the timing of interest-rate normalization.”

The remarks follow figures earlier in the day showing euro-area consumer prices surged to a fresh all-time high of 7.5% in April, ramping up pressure on the ECB to act more aggressively -- like its counterparts in the U.S. and the U.K.

Lane conceded that inflation is “very high” and carries “its own risk of momentum,” but said higher prices are also biting into incomes and consumption.

While not moving as quickly as the Federal Reserve or the Bank of England, ECB officials have grown increasingly worried that stubbornly persistent price pressures will lead to more permanent inflation above their 2% goal. An end to stimulus and an increase in record-low interest rates is possible in the summer.

Economists and investors are increasingly honing in on the chance of a July hike in the deposit rate, which has been negative since 2014.

The current stimulus set-up was developed at a time when the imperative was to tackle inflation that was stuck below 2%, according to Lane, who said “we are not returning to that low-inflation trap.”

“It’s all about the prudent and robust and durable way of having normalization,” he said from Dublin.

A key challenge for officials will be balancing their concerns over inflation with a rapidly souring growth outlook. Separate data Friday showed the euro-zone economy’s rebound from the pandemic faltering -- underscoring the damage from soaring energy costs and worsening supply snarls following Russia’s invasion of Ukraine.