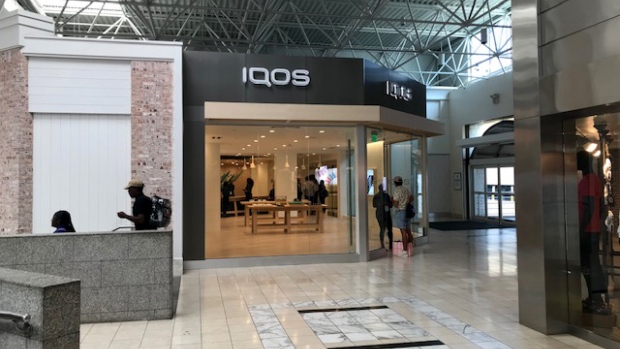 An IQOS store at the Lenox Square mall in Atlanta. , Photographer: Michael Sasso/Bloomberg

As a public health crisis intensifies over vaping, Philip Morris International Inc.’s own cigarette alternative is quietly arriving in the U.S.

A minimalist, glass-front store in Lenox Square mall in the affluent Buckhead area of Atlanta, Georgia, is offering the company’s device, which heats a tobacco plug without burning it.

The store is marked only with “IQOS,” giving little indication that it’s selling tobacco-related products. On the door, small white lettering says “Smokers 21 + welcome,” and a woman at the door checks IDs and asks potential customers if they’re smokers.

Philip Morris already sells IQOS in more than 40 countries, and had said that Atlanta would be a test market once it started U.S. sales. Altria Group Inc., which split off from Philip Morris but still sells Marlboros in the U.S., is marketing it but has yet to announce any launch. Philip Morris sells the Marlboro brand outside the U.S.

Altria spokesman David Sutton said Thursday that the store is in “soft operational mode” and that details of a launch will be forthcoming.

At the same time, e-cigarette maker Juul Labs Inc. and competitors are under intense scrutiny as health authorities have blamed vaping products for 18 deaths and more than 1,000 illnesses. The U.S. Centers for Disease Control and Prevention is working with the Food and Drug Administration and state health authorities to investigate the causes. A study published this week by Mayo Clinic pathologists said the ailments are most likely caused by exposure to toxic chemicals. Philip Morris says IQOS is a different kind of product that’s different from vaping devices.

The product began sales “about two weeks ago” in the U.S., Philip Morris Chief Operating Officer Jacek Olczak said in a phone interview with Bloomberg News earlier this week. He said the product should be marketed to people who vape, emphasizing that IQOS has been authorized for U.S. sales by the FDA after a review -- a process that Juul and other vape products haven’t been through.

Philip Morris says that because the tobacco is heated and not burned, the nicotine-containing vapor produced has less harmful chemicals than cigarette smoke. The company says on its website the product is not risk-free but offers less risk of harm compared with smoking tobacco products

“If a vape user is getting scared, there’s a high-risk case they will return to conventional cigarette -- which could be absolutely disastrous from a public health perspective,” Olczak said. “Altria should offer the alternative, which is IQOS.”

The device being sold in the U.S. is IQOS 2.4-plus, and conversations with the FDA are underway about newer models.