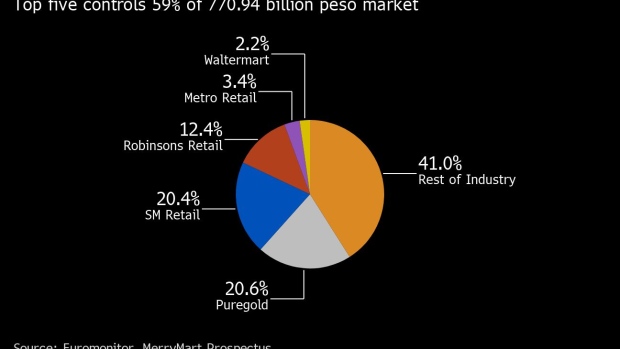 (Bloomberg) -- The college dropout who built a BBQ chicken restaurant into one of the Philippines’ biggest chains is at it again.

This time, Edgar “Injap” Sia, chairman of Injap Investments Inc. is barreling into the Philippines’ $15 billion retail market, a mature industry dominated by the empires of the country’s richest families. To help fund his charge, Sia plans to raise 1.6 billion pesos ($31 million) through his MerryMart Consumer Corp. initial public offering as early as this month.

MerryMart is calling on investors to back its plan to become one of country’s three biggest grocers by 2030, expanding from a single mom-and-pop store Sia’s parents started in 1986. It’s a steep trajectory, but one the 43-year-old has tracked before, building a $100 million restaurant chain in just seven years and then becoming one of the country’s top regional shopping mall developers.

“We like retail because there’s still a lot of room for consumer spending to grow as more disposable income will be created in the next 10 to 20 years,” Sia said in an interview. “Retail is very competitive, but that is alright since we are here for the long term.”

That triumvirate controls a combined 53% share of the Philippine retailing market, which had about 770.94 billion pesos in sales last year, according to the prospectus, which cites market research provider Euromonitor International. The industry, which includes discounters, hypermarkets and warehouse clubs, will probably grow about 6.8% a year to 1.07 trillion pesos by 2024.

Sia’s growth target could leapfrog Puregold, SM and Robinsons in store count over the next decade, dotting the country with 1,200 locations generating combined sales of 120 billion pesos by 2030.

While MerryMart could pose a threat to the biggest supermarket operators, a lot will have to go right for the company to succeed, said Manny Cruz, an analyst at Papa Securities Corp.

“It will not be a walk in the park,” Cruz said. “He has set a very ambitious goal in an industry that’s very competitive and has strong entrenched players. It’s a very tall order.”

To compete with established and bigger retailers, Sia has positioned MerryMart as a three-in-one store: a grocer, personal care shop, and pharmacy. The size and product range of each MerryMart outlet will depend on location and the neigborhood’s income.

“It’s a one-stop shop for home essentials,” Sia says, adding he concocted the MerryMart concept after noticing consumers go to multiple stores to buy “must have” items. “We created our own category. There is no store exactly like this.”

While the format may be untested, Sia has a track record of identifying gaps left by big players and building businesses to fill them.

He started the chicken barbecue restaurant in 2003 with the goal of creating a nationwide chain after realizing the niche was overlooked by Jollibee, the Philippine’s No. 1 restaurant operator, and other fast food companies.

Then he went into smaller-format community malls when most big developers were focused on large shopping centers, leaving open the centers of provincial cities and lower-income areas.

To speed expansion of MerryMart, Sia is offering franchises -- a model big grocers haven’t used. Sia, citing his chicken-barbecue experience, said there are plenty of willing entrepreneurs if the business opportunity is good.

Being a traditional retailer himself, Sia knows the threat posed by nationwide chains, giving him a good chance to convince other merchants to convert their stores and become part of MerryMart rather than sell out, according to Kerwin Chan, an analyst at COL Financial Group Inc.

“While retail is a number games, Injap has the experience and network to connect with other retailers and pull this off,” Chan said, referring to Sia by his nickname. “He’s given so much thought about the industry that he came up with a one-stop shop for home essentials that can grow rapidly through franchising.”

Franchising helped Sia to expand his chicken barbecue venture Mang Inasal from a parking lot outlet to 338 branches -- 92% of those owned by franchisees -- between 2003 and 2010, when Jollibee paid 3 billion pesos for a 70% stake.

Sia sold his remaining stake to Jollibee for 2 billion pesos in 2016, after starting a push to build shopping centers. He now has 39 operating malls and 72 sites across the country.

From seven outlets now, MerryMart has set a goal of growing to 19 stores in the second quarter and 100 shops by the fourth quarter of 2021, Sia says.

Sia acknowledges that many have questioned his plans and doubted whether he can achieve them. That won’t stop him, he said.

“You have to question and assemble the answer on your own,” Sia said. “Step back. Question it and assemble your own answer why.”

To contact the reporter on this story: Ian Sayson in Manila at isayson@bloomberg.net

To contact the editors responsible for this story: Cecilia Yap at cyap19@bloomberg.net, Dave McCombs