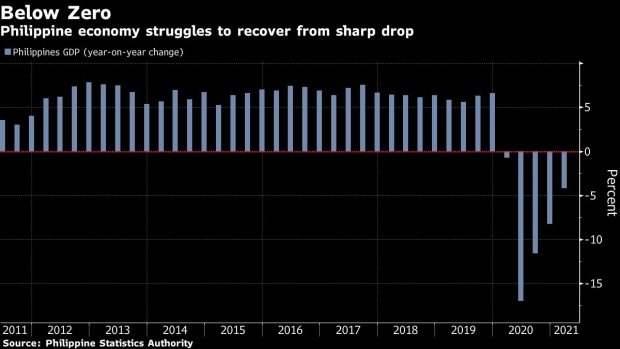 (Bloomberg) -- A reduction in Philippine lenders’ reserve requirement ratio remains a possibility, the nation’s central bank said, a week ahead of its scheduled monetary policy meeting.

“Further adjustments on the RRR remain on the table,” the central bank said Wednesday in an e-mailed reply to questions from Bloomberg News. Any decision on the bank’s monetary policy stance, including the RRR, will be based on the outlook for inflation and economic growth, the state of credit demand and money supply conditions in coming months, it said.

The comments come ahead of the central bank’s Aug. 12 monetary policy announcement, with second-quarter gross domestic product data due two days earlier. The government expects the economy to show some positive growth in the second quarter compared to the contraction a year earlier.

The Philippines has struggled to contain one of Southeast Asia’s worst Covid outbreaks, with policy makers opting for lockdowns to stem surges and with daily infections remaining high, including from the more contagious delta variant. The country’s economy has been one of the slowest to recover in Asia, shrinking more than expected in the first quarter of the year.

A reduction in RRR is consistent with the bank’s long-run goal to bring it to single digits and shift to market-based instruments to manage money supply, the central bank said.

At 12%, the country’s RRR is far higher than its Southeast Asian neighbors’. The central bank said the level is consistent with its accommodative stance, with authorities “ready to deploy additional measures as necessary to provide the necessary policy support to the domestic economy in order to ensure a sustained recovery.”