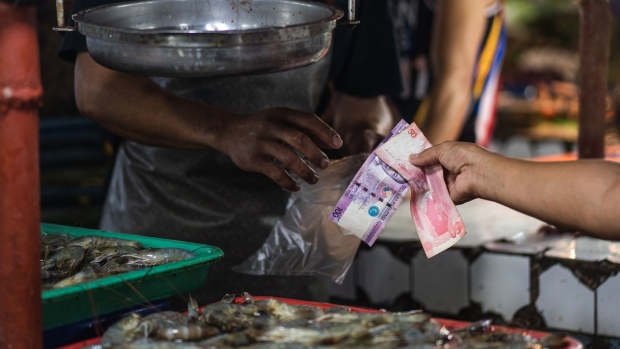 A shopper hands Philippines' Peso banknotes for payment at a market in Mandaluyong, the Philippines, on Monday, Sept. 5, 2022. Philippines inflation rate rose 6.3% from a year earlier in August, the Philippine Statistics Authority said in a statement on its website. Photographer: Iya Forbes/Bloomberg , Bloomberg

The monetary authority, which has raised the policy rate by a total of 2.25 percentage points, makes its decisions in relation to inflation, Medalla told reporters in Manila on Friday. It considers the exchange rate to the extent that it aggravates imported inflation, and any response to Federal Reserve depends on how much the latter would hike, he added.

“We will not allow excessive changes in the exchange rate,” the governor said. “We, of course, sell strategically. It’s wiser to keep your powder dry and shoot later.”

Separately in his speech, he repeated plans to increase central bank’s debt issuance to trim the supply of peso liquidity that can be used to buy more dollars in the market, saying it’s a “more permanent form of sterilization.” The central bank has been conducting some swaps and other market operations, and can also sell dollar forwards, he said.

Higher interest rates, intervention in the currency market and sterilization should be sufficient to cushion the economy against risks, Medalla said. “I am confident that by selecting the correct combination of these three measures, we will be able to navigate.”

He also urged the public to keep foreign currency transactions within the banking system, Medalla said, warning that doing otherwise will widen the differential between the official spot rate and the gray market.

The peso’s slump to a record low has eroded the Philippines’ international reserves to the lowest level in two years in August. The central bank is scheduled to report the September data soon.

Asked whether the central bank will continue to be active in the currency market in the coming months, Medalla said: “It depends because there are so many other things that are happening outside the Philippines that are actually causing the dollar to weaken.”