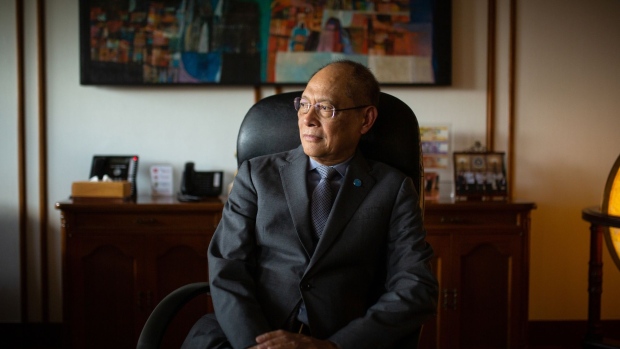 Benjamin Diokno, governor of the Bangko Sentral ng Pilipinas (BSP), poses for a photograph in Manila, the Philippines, on Wednesday, Feb. 5, 2020. Diokno said it would be better to cut interest rates sooner than later, a signal that policy makers will likely lower borrowing costs Thursday. , Bloomberg

(Bloomberg) -- Philippine economic managers on Friday urged the immediate passage of a sovereign wealth fund plan, which was revised to source contributions from central bank’s dividends instead of pension funds.

Finance Secretary Benjamin Diokno said the revised proposal will require the Bangko Sentral ng Pilipinas to contribute all of its annual dividends into the wealth fund for the first two years. For subsequent years, he said the central bank may put in just half of its dividends and use the other half to increase the monetary authority’s capital.

“The establishment of a sovereign wealth fund is a tried and tested investment vehicle,” Diokno said at a briefing, reading a statement which he said was signed by officials including the central bank governor. “Let us not delay economic progress.”

The statement signals consensus among economic managers on the new wealth fund plan, after the initial proposal drew opposition, including from BSP Governor Felipe Medalla. If the plan pushes through, the Philippines will join other developing nations like India and Indonesia in turning to sovereign wealth funds to support their economies.

The planned wealth fund can increase investment and funding of big-ticket infrastructure as well as high-return “green” and “blue” projects and countryside development, Diokno said. The fund can also help boost the nation’s fiscal space and reduce fiscal pressure, he added.

Diokno said the wealth fund can also tap mining royalties and proceeds from bonds including those targeting overseas Filipinos’ remittances. “Any resources that is exhaustible, that’s a good source of funds,” the finance chief said.

The proposed wealth fund will be run professionally and subject to accountability, Diokno said, adding that the board will be advised by the national treasurer and the economic planning agency.

The central bank will also be given board seat in the proposed sovereign wealth fund, Diokno said. The nation’s state-run pension funds won’t be mandated to contribute to the fund, but they may do so if their boards approve it, he added.