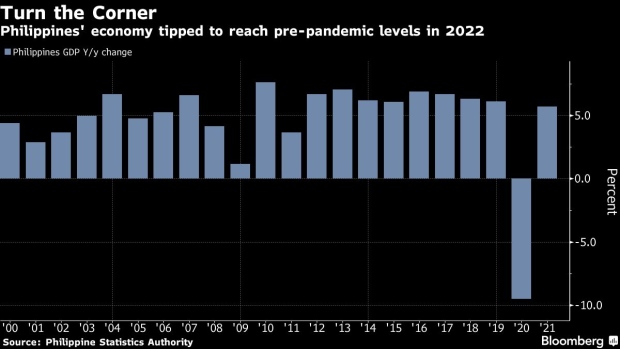 Workers carry boxes on trolleys past stalls at Divisoria Market in Manila, the Philippines, on Sunday, Dec. 5, 2021. The Philippines had loosened virus restrictions in recent weeks as Covid-19 infections declined but with the emergence of the virus variant however, Metro Manila will remain under Alert Level 2 to December 15 and the Southeast Asian nation has rolled back its reopening totourists. Photographer: Geric Cruz/Bloomberg , Bloomberg

Gross domestic product in the three months through March grew 8.3% from a year ago, the Philippine Statistics Authority said Thursday, versus a median estimate for a 6.8% advance in a Bloomberg survey. That compares with a contraction in the same quarter last year.

Growing price pressures threaten consumer spending, a key output driver, while the global economic outlook worsens following Russia’s war in Ukraine and virus lockdowns in China. Some economists want Marcos, the presumptive president-elect after the May 9 elections, to make fighting inflation his top priority, while others expect he will focus on infrastructure building to create jobs and bolster the economy.

The nation’s policy makers have said GDP needs to grow at least 6% for the next five to six years to help pare debt.

Bangko Sentral ng Pilipinas, which has stood pat on rates to support economic recovery instead of tamping down price pressures, is scheduled to set monetary policy on May 19.