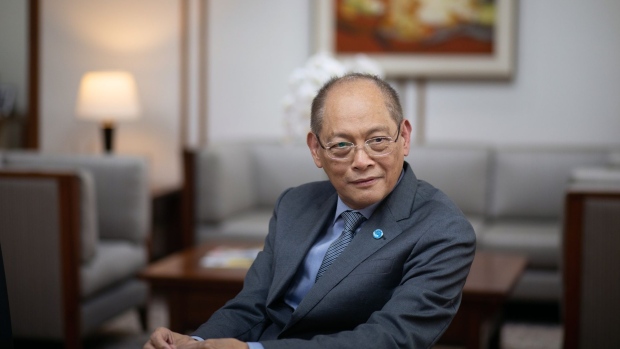 Benjamin Diokno, governor of the Bangko Sentral ng Pilipinas (BSP), pauses during an interview in Manila, the Philippines, on Wednesday, Feb. 5, 2020. Diokno said it would be better to cut interest rates sooner than later, a signal that policy makers will likely lower borrowing costs Thursday. , Bloomberg

(Bloomberg) -- The Philippines has more than sufficient foreign exchange reserves that can be set aside for a proposed sovereign wealth fund, Finance Secretary Benjamin Diokno said, allaying the central bank’s concerns over the plan.

There’s “too much ammunition,” Diokno, a former central bank governor, told reporters, referring to the foreign reserves. He was responding to questions on whether using the reserves to be part of the wealth fund would hurt the central bank’s ability to use it as a tool against foreign exchange volatility.

Establishing the Maharlika Investments Fund won’t affect the Bangko Sentral ng Pilipinas’ independence, Diokno said, adding that the central bank should have a say on how much foreign reserves it will contribute to the fund.

A bill filed by lawmakers including the presidential son, Senior Deputy Majority Leader Sandro Marcos, proposes that the monetary authority contribute annually to the fund. The central bank will have to put into the fund the equivalent of 10% of remittances from overseas Filipinos and another 10% from earnings of outsourcing companies, according to the bill.

The Philippines’ foreign exchange reserves stood at $94.1 billion at end-October, below the $110 billion record high in December 2020 as the central bank stepped up efforts to support the peso. The BSP would “like to try to preserve” its ammunition to manage volatilities in the exchange rate, Monetary Board member Bruce Tolentino said at a briefing.