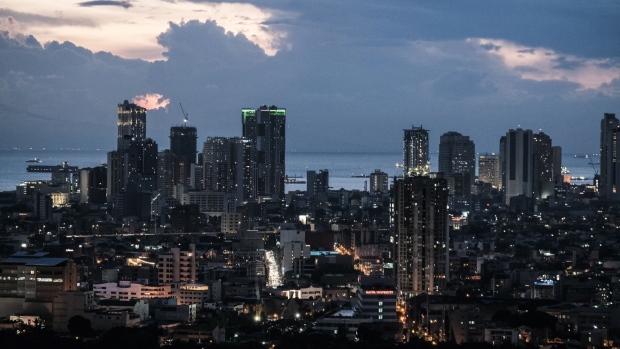 Buildings at dusk in the Central Business District (CBD) in Makati City, the Philippines, on Tuesday, Aug. 16, 2022. The Philippine central bank will sustain its rate-hike cycle this quarter, following a surprise move in July, to quell broadening price pressures, according to Bloomberg survey of economists. The benchmark interest rate is expected to increase by another 75 basis points to 4% by the end of September, a survey showed. Photographer: Veejay Villafranca/Bloomberg , Bloomberg

(Bloomberg) -- The proposed Philippine sovereign wealth fund has enough safeguards and will benefit the economy, officials said Wednesday, after the plan drew criticisms from business groups.

“We can cherry-pick the investments that will suit our risk parameters,” Veloso said. The state pension fund is among the agencies proposed to provide the initial money totaling 250 billion pesos ($4.5 billion) for the sovereign wealth fund, based on a bill filed by President Ferdinand Marcos Jr.’s allies in Congress.

The proposal has drawn concerns from business groups, including the Makati Business Club that counts executives from the nation’s largest companies as members. The group said in a statement earlier this week that the wealth fund plan has “many potential infirmities,” including on transparency and fiscal prudence.

The pending measure in Congress contains safeguards to ensure the integrity of the fund, National Treasurer Rosalia de Leon said in a separate statement. The proposed wealth fund will be subject to internal, external and government audits, she said.

Bangko Sentral ng Pilipinas Governor Felipe Medalla last week cautioned against the wealth fund plan, raising concerns over governance and potential impact on central bank independence. Finance Secretary Benjamin Diokno has, however, allayed these concerns, saying the nation’s foreign exchange reserves are more than enough such that a portion can be set aside for the proposed fund.

The central bank will have to put into the fund the equivalent of 10% of remittances from overseas Filipinos and another 10% from earnings of outsourcing companies, according to the bill.