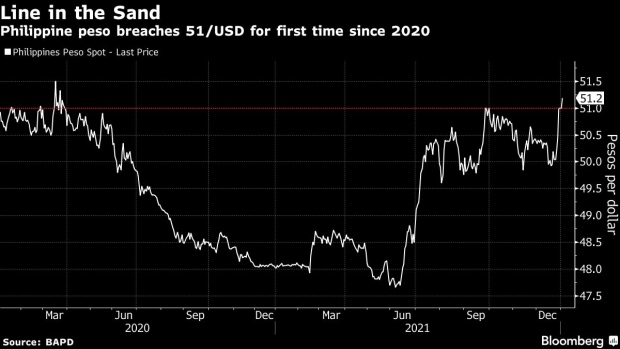 (Bloomberg) -- The Philippine peso weakened past 51 per dollar for the first time since April 2020 amid speculation the nation’s trade deficit will widen as domestic demand improves.

The peso had attempted to breach the 51 barrier in late September. Central bank Governor Benjamin Diokno said at that time authorities can “provide dollar liquidity” if there’s excessive volatility in the market.

“Into 2022, we will watch the trade deficit which may widen further as domestic demand recovers, a negative to the peso,” said Irene Cheung, a senior strategist at Australia & New Zealand Banking Group Ltd. in Singapore. “The next barrier is 52.”