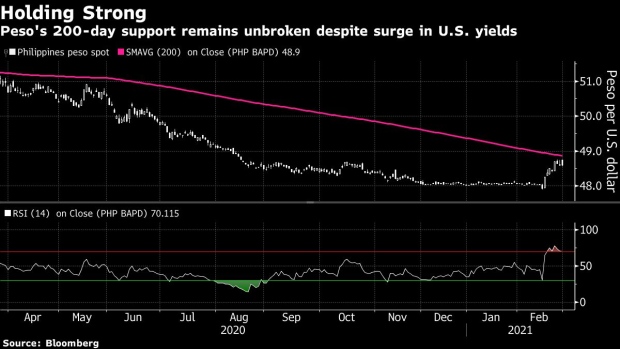 (Bloomberg) -- The Philippine peso has been under siege from rising Treasury yields and buoyant crude prices. But technicals may offer some support.

The peso slumped to its lowest level in six months last week following an extension of coronavirus-led curbs in the nation and delays in vaccine rollouts. The 10-year Treasury yield’s surge to 1.6% added to the bearish sentiment.

Still, losses have been limited to near the dollar-peso’s 200-day moving average so far, spurring hopes that the barrier may hold at least in the near term. The pair’s relative strength index, a momentum indicator, is in the overbought territory, providing further support to the Philippine currency.

Still, expectations that U.S. yields will rise further is keeping sentiment cautious toward the peso. Especially after the rout in emerging market assets on Friday brought back memories of the 2013 taper tantrum among investors.

“How U.S. yields evolve from here and the broad USD picture will be the key driver of USD/PHP,” said Irene Cheung, an currency strategist at Australia & New Zealand Banking Group Ltd. She sees the peso at 48.30 per dollar at the end of the quarter.

The peso is among Southeast Asia’s worst performing currencies this year. It’s declined 1.1% so far this month to 48.59 as global funds sold $171 million Philippine stocks during this period.

Technical factors supporting the peso are likely to come into focus once again on Friday, when February inflation data is due. If price pressures quickened, this could erode the nation’s real yields and weigh on the currency.

Comments from Bangko Sentral ng Pilipinas Governor Benjamin Diokno that the rise in the nation’s consumer prices is temporary will also be put to the test. A Bloomberg survey forecasts inflation quickened to 4.8% in February, which would be the fastest since December 2018.

“Rising inflation has pushed Philippines’ real rates into the negative territory,” said Divya Devesh, head of Asean and South-Asia currency research at Standard Chartered Bank in Singapore. “Depressed real rates and elevated real effective exchange rate is a negative for the PHP,” he said, adding that the peso may fall toward 45.50 per dollar this year.

Below are the key Asian economic data and events due this week: