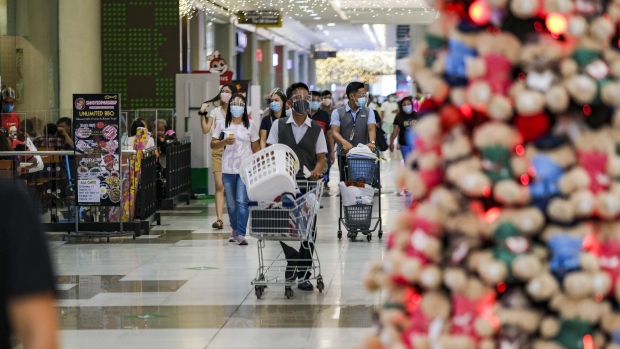 (Bloomberg) -- The Philippine peso is seen notching a third year of gains in 2021 as the sluggish economic recovery curbs imports and with remittances expected to rebound.

The peso, which closed at 48.085 per dollar on Friday, will rise to 47.50 by the end of next year, according to a Bloomberg survey. The currency has risen 5.4% this year, the biggest gainer in Southeast Asia.

The Philippine economy is forecast to start growing only in the second quarter of 2021, putting it among the slowest to recover from the pandemic that has ravaged the global economy. Falling imports have crimped demand for dollars, with the peso surging to a four-year high in December.

“As long as domestic demand is far from a full recovery, we expect the peso to get even stronger,” said Eugenia Victorino, head of Asia strategy at Skandinaviska Enskilda Banken AB in Singapore. Among her company’s 2021 top trade recommendations is to sell the dollar against the peso with a target of 46.

Imports fell 19.5% in October from a year ago, its 18th month of declines. The narrower trade balance is boosting the current account, with the central bank raising its forecast for a surplus next year to 1.5% of gross domestic product.

The global growth rebound will also boost demand for Filipino workers abroad next year, with the central bank predicting remittances will advance 4% after an expected 2% drop in 2020. Remittances are the nation’s largest source of foreign exchange after exports.

Philippine peso bonds, Asia’s top performer this year, are expected to remain supported by the central bank’s accommodative policy. Bangko Sentral ng Pilipinas, which held its key interest rate on Thursday at a record-low 2%, has said it stands ready to use a full range of tools to boost growth.

”With BSP pledging an accommodative environment into next year, bonds will remain supported,” said Dan Roces, chief economist at Security Bank Corp. in Manila. “A low interest-rate environment means moderate returns for bonds, with yields to slowly retrace to pre-pandemic levels on the back of more borrowing to fund pandemic expenses.”

The nation’s bonds have handed investors almost 19% this year. The yield on the 10-year debt has fallen to about 3% from more than 5% in March, even as the government increased debt sales and projected a wider budget deficit next year.

The Philippine Stock Exchange Index could climb to 8,300 by the end of next year, according to Julian Tarrobago, head of equities at ATR Asset Management Inc. in Manila and whose ATRAM Alpha Opportunity Fund has beaten its peers with a 66% return since the trough in March.

While 2021 corporate earnings will probably be only about 86% of the 2019 level, Tarrobago is optimistic that foreign funds will reverse course from this year’s exodus as the economy’s recovery leads to a sustained rebound in earnings. Spending for the May 2022 presidential elections could also provide a potential boost in the second half of next year.

“The market should be able to trade above its five-year historical average valuation,” Tarrobago said. “There will still be volatility but it won’t be like what we have seen this year.”

Foreign funds will help drive up stock valuations to 19 to 20 times 12-month forward earnings, he said. Tarrobago forecasts earnings per share to grow 45% in 2021 from an expected 39% contraction this year.