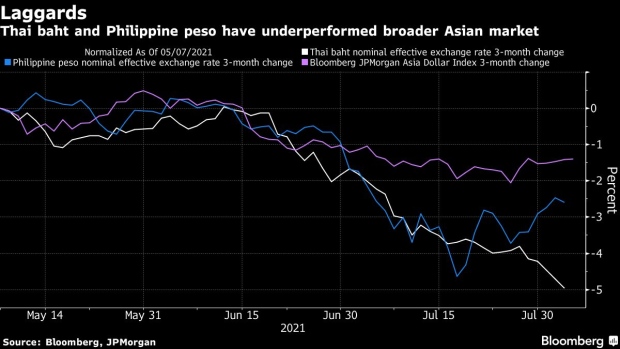 Customers purchase fruits at a market in the Makati district of Manila, the Philippines, on Monday, March 16, 2020. Trading of Philippine stocks, peso and bonds will be shortened as the capital region started a lockdown from Sunday to contain the outbreak of the novel coronavirus amid a spike in cases. , Bloomberg

(Bloomberg) -- The Philippine peso and the Thai baht fell as the spread of the delta coronavirus strain fueled speculation the two economies may ease policy.

The baht slid to 33.192 per dollar, its lowest level since 2018, after the Bank of Thailand cut its growth forecast for the year to 0.7%. The peso fell as much as 1.2%, the most since 2013, after the nation’s central bank said Wednesday a reserve-ratio cut is on the cards just as the Manila capital is set to enter a two-week lockdown.

An interest-rate cut could add to the burden for both currencies, which have been hit by slowing growth and the prospect of a reduction in U.S. monetary stimulus. The baht and the peso have declined more than 2% this quarter in the worst performance among Asian currencies.

“Worsening coronavirus situations in both countries add to concern over deterioration in the economies and is fanning speculation of monetary policy easing,” said Kota Hirayama, an emerging-market economist at SMBC Nikko Securities Inc. in Tokyo. “The direction of monetary policy globally has been shifting toward tapering or tightening, so both the baht and peso look at a disadvantage from the perspective of interest-rate differentials.”

Thailand’s economy could be headed for a second straight annual contraction as movement restrictions and political unrest have hit the tourism-reliant country disproportionately hard. The Philippine economy has been one of the slowest to recover in Asia, shrinking more than expected in the first quarter of the year as it struggled to contain the virus outbreak.