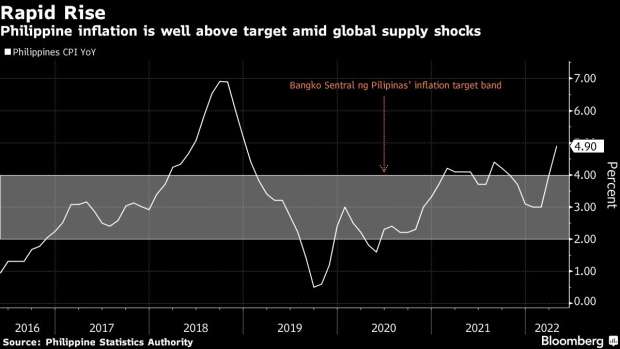 (Bloomberg) -- The Philippine central bank will on Thursday consider when to wean the economy away from record-low interest rates amid surging inflation, leaving economists split over how soon that might be.

Thirteen of the 21 economists surveyed by Bloomberg expect Bangko Sentral ng Pilipinas to raise its benchmark rate by 25 basis points to 2.25% as early as Thursday, in what will be the first increase since 2018. The rest see no change just yet.

While global peers led by the Federal Reserve have begun tightening monetary policy to stem price pressures fanned by the war in Europe, BSP Governor Benjamin Diokno indicated Wednesday that he stands ready to act should he see any sign of inflation expectations becoming unanchored.

With the economy outperforming in the first quarter, calls are growing for the BSP to act faster to keep Southeast Asia’s second-fastest inflation from denting a recovery in demand. Pandemic restrictions in China, the Philippines’ top trading partner, risks further fanning price gains.

Here’s what else to watch out for in the policy announcement:

To gauge the extent of rate normalization, analysts are watching how alarmed BSP is by inflation and, more importantly, price expectations.

The wage board this month approved raising daily salaries in capital Manila and neighboring areas to offset inflation -- a sign price pressures are flowing to other pockets of the economy. Manufacturers, including “Lucky Me!” noodles-maker Monde Nissin Corp., warned of price increases amid spiraling global commodities costs.

BSP is likely to raise its inflation forecasts Thursday, said Sophia Ng, a currency analyst at MUFG Bank, who expects a total 75 basis points of rate hikes this year. “There are risks of a more aggressive pace of policy tightening if inflation continues to exceed expectations.”

Still, some economists see the BSP waiting a tad longer, citing output that remains below its pre-Covid pace despite stellar headline numbers.

Full reopening of schools and tourism are “missing pieces of the recovery story,” said Michael Ricafort, economist at Rizal Commercial Banking Corp. in Manila. Stronger growth will “support and justify” a rate hike in June, he said.

A key barometer for policy through the pandemic, BSP’s economic view bears watching, especially the commentary on risks from the war and China’s slowdown.

Shortly after the rate announcement, BSP will release a policy report, which focuses on forward-looking discussions on inflation and its impact on monetary settings.

Published quarterly, the report is expected to detail BSP’s assumptions around its economic and consumer-price growth forecasts, ranging from global crude oil costs to foreign exchange to the US’s federal funds rate.

Policy makers are likely to “highlight growing risks of second-round effects,” MUFG’s Ng said. “BSP would need to hike soon to curb inflationary pressures especially since it is now seen to be behind the curve.”