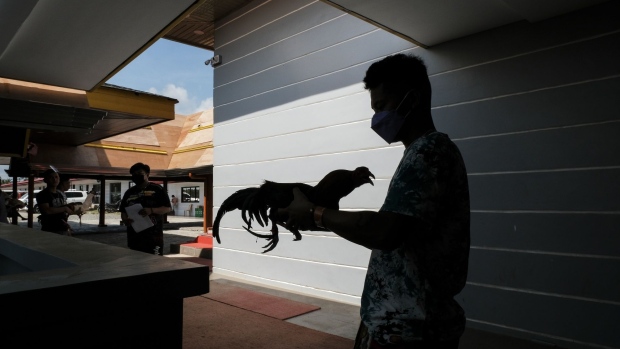 A breeder holds a rooster before a match at the Pitmasters Live compound in Lipa City, Batangas, the Philippines, on Saturday, Jan. 29, 2022. Cockfighting, in which two roosters spar to the death, has become an online craze in the Philippines. , Bloomberg

(Bloomberg) -- Philippine President Rodrigo Duterte said he will order the termination of online cockfighting operations, which have been daily raking in millions of dollars in wagers.

Duterte said online cockfighting, known locally as e-sabong, is “working against our values,” and the Interior Department has recommended stopping operations after a review.

Cockfighting, in which two roosters spar to the death, has become an online craze in the Philippines. Once a declining bloodsport, the centuries-old game is now a major industry across this Southeast Asian nation, attracting a new generation of gamblers.

Online Cockfighting Wagers Rake in Billions in the Philippines