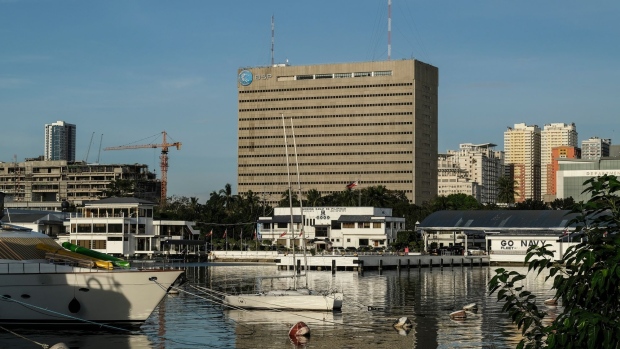 The Bangko Sentral ng Pilipinas headquarters complex in Manila, the Philippines, on Tuesday, Dec. 14, 2021. The Philippines slightly raised its economic growth outlook for 2021 and forecast narrowing fiscal deficits in the next years, as it expects to sustain the recovery momentum amid easing mobility curbs. , Bloomberg

(Bloomberg) -- Philippine lawmakers are looking to tap central bank profits to seed a proposed sovereign wealth fund, after an earlier plan to use pension funds for the purpose triggered opposition.

Authors of the bill to create the Maharlika Investments Fund decided to change the source of funds after a meeting with economic managers, Congresswoman Stella Quimbo, one of the proponents, said in a statement posted on the House of Representatives’ Facebook page late Wednesday.

The House appropriations committee will tackle the changes on Friday, Quimbo said.

If the proposal goes through, the Philippines will join Indonesia, India and other developing nations in turning to sovereign wealth funds to support their economies. Strained budgets after the pandemic have increased the need for alternative sources of funding for economic projects.

The planned wealth fund’s purpose is to invest “existing surplus capital of the government,” she said, adding that safety nets will also be added to the proposal.

The idea isn’t without critics. Bangko Sentral ng Pilipinas Governor Felipe Medalla last week raised concerns about the wealth fund plan, including over its governance and potential impact on the monetary authority’s independence. Government officials such as Finance Secretary Benjamin Diokno have, however, sought to allay these fears.

(Adds context on wealth fund in the fourth paragraph.)