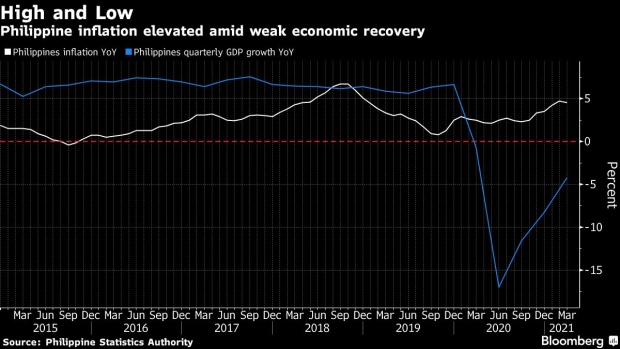 Signage is displayed atop the Bangko Sentral ng Pilipinas headquarters in Manila, the Philippines, on Thursday, Feb. 7, 2019. The Philippines central bank left its benchmark interest rate unchanged for a second straight policy meeting, while cutting inflation forecasts for this year and next. Photographer: Veejay Villafranca/Bloomberg , Bloomberg

Bangko Sentral ng Pilipinas left the benchmark rate at 2% Wednesday, as predicted by 20 of 21 analysts in a Bloomberg survey. One forecast a 25 basis point cut.

“The Monetary Board believes that sustained support for domestic demand remains a priority for monetary policy, especially as risk aversion continues to hamper credit activity despite ample liquidity in the financial system,” Governor Benjamin Diokno said in announcing the rate decision.

The central bank has been focused on supporting the shaky recovery, which has taken a hit from recent curbs to contain a renewed surge in infections. Gross domestic product contracted by a larger-than-expected 4.2% in the first quarter, putting the Philippines on track to record one of the weakest rebounds in Southeast Asia.

One-month peso non-deliverable forwards rose 0.1% after the decision to 47.96.

With policy makers looking past inflation that’s running above the 2%-4% target, any slowdown in the pace of price gains could potentially open the door to more easing.

Other points from the rates briefing: