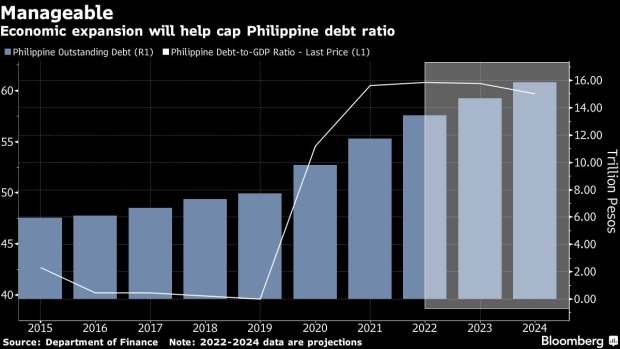 (Bloomberg) -- The Philippines must grow by more than 6% annually in at least the next five years to get out of the debt bloated by the Covid-19 crisis, Finance Secretary Carlos Dominguez said.

The pandemic disrupted consumption and business activity, which in turn crimped tax revenue and pushed the Southeast Asian nation to rely more on debt to fund spending plans. While Dominguez recently said he’s readying a fiscal consolidation plan for the new government, analysts at Barclays Plc to Fitch Solutions see the presidential election in May leading to policy continuity.

The Philippines targets a growth rate of 7%-9% this year as consumption starts returning to pre-pandemic levels. The government extended the least stringent movement curbs through end-April in metropolitan Manila, which accounts for a third of the nation’s economic output.