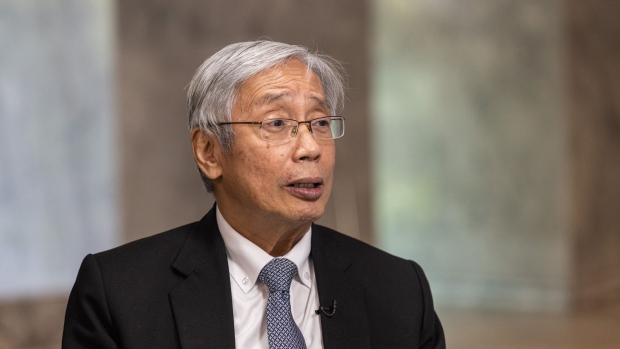 Felipe Medalla, governor of the Bangkok Sentral ng Pilipinas (BSP), during a Bloomberg Television interview on the sidelines of the Bank of Thailand - Bank of International Settlements Conference in Bangkok, Thailand, on Friday, Dec. 2, 2022. The Philippine central bank will debate the size of an interest-rate hike this month with a 25 or 50-basis-point move in the cards, Medalla said. , Bloomberg

(Bloomberg) -- The Philippine central bank will debate the size of an interest-rate hike this month with a quarter or a half-point move in the cards, Governor Felipe Medalla said.

“The board members will probably be split between doing 25 and 50,” Medalla said in an interview with Bloomberg Television’s Haslinda Amin on Friday on the sidelines of a central bank conference in Bangkok. Bangko Sentral ng Pilipinas is close to the peak rate as the Federal Reserve approaches the end of its tightening cycle, he said.

BSP has leaned on a mix of tools to ward off risks from a depreciating peso to quickening inflation. It has raised the key policy rate by a total of 300 basis points this year, while intervening in the currency market and tamping down on speculative currency trades.

The peso’s recent gains against the dollar “will make speculators a lot less aggressive,” Medalla said. There are days when BSP is buying dollars whereas “before everyday was a selling day,” he said.

While the peso remains Southeast Asia’s worst performer this year, it has gained more than 4% this quarter. Asked if he’s comfortable with the currency’s level, Medalla said: “Let’s put it this way, we move just like all the other currencies.”

The peso climbed for a seventh day, poised to advance by 1% for a second straight week on Friday.

Medalla flagged on Tuesday that the BSP may halt interest-rate increases as early as the first quarter of 2023 if inflation cools closer to the central bank’s 2% to 4% target. He forecast price gains to peak this month and move near the mid-point of the monetary authority’s goal by July or August.

--With assistance from Richard Lewis and Haslinda Amin.

(Adds more comments from the governor from fourth paragraph.)