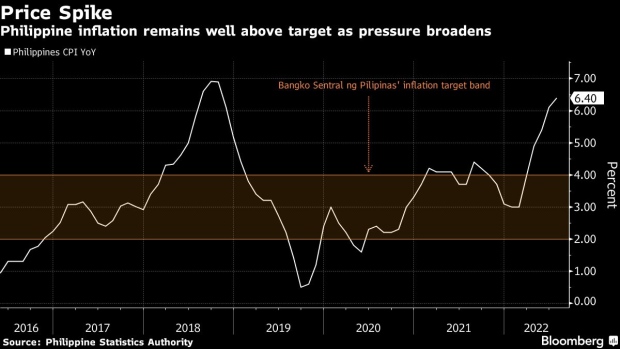 Buildings in the Central Business District (CBD) in Makati City, the Philippines, on Tuesday, Aug. 16, 2022. The Philippine central bank will sustain its rate-hike cycle this quarter, following a surprise move in July, to quell broadening price pressures, according to Bloomberg survey of economists. The benchmark interest rate is expected to increase by another 75 basis points to 4% by the end of September, a survey showed. Photographer: Veejay Villafranca/Bloomberg , Bloomberg

(Bloomberg) -- The Philippine central bank is widely expected to deliver another large interest-rate hike to cool inflation from a near four-year high and support a currency that’s the worst performer in Asia this month.

Sixteen of 22 analysts surveyed by Bloomberg predict Bangko Sentral ng Pilipinas will raise its overnight reverse repurchase rate by 50 basis points to 3.75% on Thursday. Five forecast a quarter-point increase, while one saw the central bank standing pat after having hiked rates by 125 basis points in three moves this year.

BSP Governor Felipe Medalla on Wednesday said policy makers’ focus is to anchor price expectations, and the bank remains open to more rate hikes to bring inflation back to its 2%-4% target. He also repeated an earlier signal that the move Thursday would either be a quarter or a half-point increase.

July inflation data after the central bank’s surprise 75 basis-point hike showed price gains quickened to the the fastest since late 2018, while the peso slid to the bottom of the pack in Asia this month. Latest data suggest that price pressures are intensifying as demand strengthens, Medalla said on Wednesday.

Here’s what else to watch out for in the announcement at 3 p.m. in Manila:

Inflation expectations remain an important barometer on the pace and scale of the rate-increase cycle.

“The need to curb inflation remains,” Sophia Ng, a currency analyst at MUFG Bank Ltd., said. “A key portion of the statement to lookout for will be the BSP’s updated assessment on price pressures and whether that continued to broaden since the surprise hike last month,” she said.

The BSP is also expected to release its quarterly report, discussing forward-looking price assessments and their impact on monetary settings. Updated annual average inflation forecasts through 2024 will also be unveiled.

Another factor for the BSP’s moves is the Federal Reserve’s monetary policy path, to the extent that its impact on the peso could add to price pressures. Last month’s off-cycle Philippine rate hike came hours after a higher-than-expected US inflation print. While price gains in America has since cooled, San Francisco Fed President Mary Daly signaled it doesn’t signal a victory yet.

“Further local policy rate hikes would also be partly a function of how the peso exchange rate behaves and the impact on actual inflation data as well as inflation expectation,” said Michael Ricafort, an economist at Rizal Commercial Banking Corp.

The peso has dropped about 1.3% this month, the most among major Asian currencies tracked by Bloomberg, based on prices as of late Wednesday. That would add to strain on inflation in a nation that imports goods from oil to rice, and fan price expectations higher. The nation is planning to import sugar to address the shortage, President Ferdinand Marcos Jr. said.

Gross domestic product grew below expectations last quarter, raising questions on whether the central bank will sustain aggressive rate increases. The key rate is expected to rise to 4% this quarter, according to a separate survey.

“We expect this month to mark a reassessment of the board’s stance,” Miguel Chanco, chief emerging Asia economist at Pantheon Macroeconomics Ltd., said, citing what he called a “disappointing” GDP report. Chanco is the lone analyst to forecast a rate pause on Thursday.