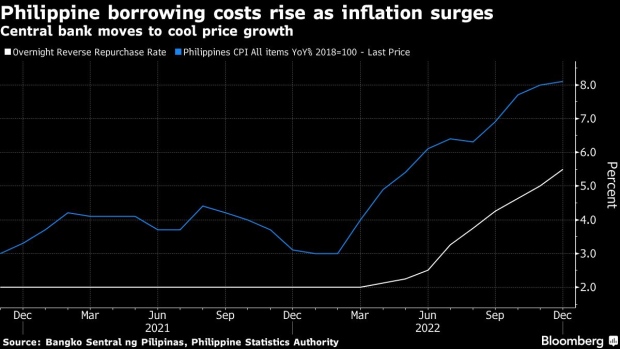 (Bloomberg) -- The Philippines weathered price and interest-rate pressures to deliver one of Asia’s strongest expansions, with robust spending boosting growth by the most since the 1970s amid a bleak global outlook.

Gross domestic product in the three months through December grew 7.2% from a year earlier, the Philippine Statistics Authority said Thursday, above the 6.6% median estimate in a Bloomberg survey. Output rose 2.4% compared to the previous quarter, and against a 1.3% forecast.

For the full year, GDP expanded 7.6% in 2022, surpassing the 7.4% survey median, and clocking in the best annual performance since 1976, according to National Statistician Dennis Mapa.

Fueled by pent-up demand that withstood the hottest inflation since 2008 and the most aggressive monetary tightening in two decades, the nation remains a bright spot in Asia. South Korea — which also saw elevated price gains and rate increases — slumped last quarter.

The Philippines is poised to keep growing about 7% this year, President Ferdinand Marcos Jr. said in an interview earlier this month. Marcos presides over a nation that has grown the most since the era of his father whose turbulent regime also saw the economy shrink before his ouster.

“The improvements in labor market conditions, increased tourism, revenge and holiday spending, and resumption of face-to-face classes supported growth in the quarter, further reflecting a solid rebound in consumer and investor confidence in the economy,” said Arsenio Balisacan, secretary at the National Economic and Development Authority.

While annual private consumption growth slowed, it remained robust at 7% in the fourth quarter. Still, the government is confident a “high-growth trajectory” can be sustained, Balisacan said. China’s reopening will “surely” be a boon, he said.

Philippine stocks rose as much as 0.3% while the peso traded as much as 0.4% higher against the dollar after the data.

Still, the Philippines won’t be fully immune to a global slowdown. “We expect a difficult year ahead of the Philippines,” said Capital Economics Ltd.’s Gareth Leather. Fast inflation and tighter monetary setting could weigh on spending, while a sharp reversal in pandemic-induced demand means exports are likely to struggle, he said in a note after the data was released.

Overseas sales contracted more than estimated in December, according to data earlier on Thursday, a sign of the challenges to come from slowing global growth.