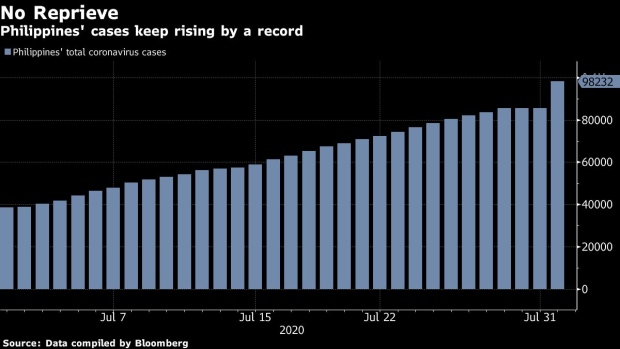 People sit watching Philippine President Rodrigo Duterte during a televised broadcast of the State of the Nation address in Manila, the Philippines, on Monday, July 27, 2020. Duterte pushed for corporate tax cuts and targeted support for pandemic-hit industries as part of a recovery plan, and told lawmakers he'd asked Chinese President Xi Jinping to help the Philippines get priority access to a Covid-19 vaccine. , Bloomberg

(Bloomberg) -- The Philippine health department rejected a call by medical frontline workers to reimpose a two-week lockdown in Metro Manila and nearby areas, pointing to concerns following the nation’s worst economic slump in three decades.

“The economy cannot be at a standstill and employment and livelihood are at the minds of millions of Filipinos right now,” the Department of Health said in a statement.

Groups of medical staff on Saturday appealed to the government to reintroduce the so-called enhanced community quarantine in the capital and nearby provinces for the two-week period to ease a rise in infections and allow health-care workers time to recover from exhaustion. They also called for a comprehensive policy to fight the pandemic and a central body that will oversee its implementation.

President Rodrigo Duterte directed the coronavirus taskforce to immediately act on concerns expressed by the doctors and nurses, presidential spokesman Harry Roque said. Executive Secretary Salvador Medialdea convened a meeting Saturday night with key Cabinet members, including the secretaries of health, trade and budget to to discuss the issue, according to Roque.

New Covid-19 cases rose by a record for a third day on Saturday, bringing the country’s total to 98,232, the health authority said. Still, it’s weighing the increase in cases against the impact seen from an earlier lockdown that shut businesses and curbed consumption, especially with the capital and nearby provinces accounting for about two-thirds of the nation’s economic output.

Like the Philippines, countries globally are facing the tough decision of shutting down businesses and imposing stay-home orders with a resurgence in the outbreak.

U.K. Prime Minister Boris Johnson, who recently compared the idea of a second nationwide lockdown as a tool similar to a “nuclear deterrent,” is considering sealing off Greater London to avert a second national lockdown, according to news reports on Saturday.

To battle the spread of the virus, the Philippine health department said it will boost contact-tracing in industries with clusters of infections such as construction, transport and technoparks. It also reminded businesses that rapid tests aren’t recommended, and that employees should be screened for symptoms.

The Philippines, which implemented one of the earliest and longest lockdowns in Asia to stem the outbreak, eased restrictions in June to allow freer movement of people and the reopening of most businesses. Infections have since swelled five times, making it the country with the second-highest number of total infections in Southeast Asia.