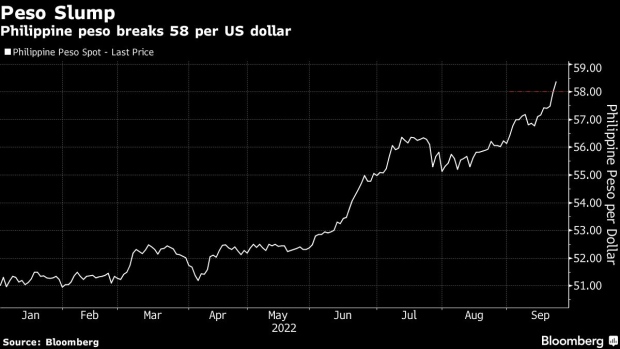 While Bangko Sentral ng Pilipinas and Bank Indonesia delivered half-point hikes within minutes of each other, the State Bank of Vietnam moved hours later with a 100 basis points increase to its main policy rates -- the first adjustment since September 2020.

While the Philippine decision belied guidance from Governor Felipe Medalla on the need for only quarter-point adjustments, Indonesia surprised most economists in a Bloomberg survey who had expected a 25 basis-point move -- the same as its last hike. Vietnam’s action followed calls from Prime Minister Pham Minh Chinh for measures to support the currency.

“The decision to increase interest rates is a front-loaded, pre-emptive, and forward looking step to lower inflation expectations,” BI Governor Perry Warjiyo said, adding that it will also help stabilize the rupiah, which has fallen through the psychological level of 15,000 to a dollar.

Asian currencies including the rupiah, peso and the dong are facing renewed pressure after the Fed’s hawkish rhetoric on controlling inflation. While expectations of a stronger recovery in the Southeast Asian economies allow policy makers room to support their currencies and shield against imported inflation, Warjiyo said there was no need to press ahead with the aggressive rate action.

That said, analysts see the need for central banks in the region to tear up their playbooks to get a better handle on inflation.

BI’s move “is a telltale sign of how the global monetary policy landscape has hardened in recent days,” said Wellian Wiranto, economist at Oversea-Chinese Banking Corp. in Singapore. “Against the specter of the higher-for-longer Fed rates, it can no longer be assured that a slow and gingerly approach to its own monetary policy normalization can anchor exchange rate stability like before.”

“Trouble is, the central bank is also shooting itself in the foot -- its yield-curve controls continue to prop up growth and its tolerance of ample liquidity will slow the transmission of” BI’s rate hikes.

Still, Warjiyo said inflation can be better controlled with help from the government, with BI expecting consumer prices to peak above 6% this year, and core inflation, the central bank’s preferred gauge, to rise to 4.6% before returning within its 2%-4% target only by the third quarter of 2023.

Policy makers in the Philippines stopped short of giving a clear signal on the policy trajectory after Thursday’s half-point increase, which was above Medalla’s earlier signal for 25 basis-point moves.

“The BSP reiterates its commitment to take all necessary actions to steer inflation towards a target-consistent path over the medium term,” according to a statement from the central bank, which sees average price growth forecast for 2022 at 5.6% from 5.4% seen previously, and next year’s at 4.1% from 4%.

The bank has raised its key rate by 225 basis points in five moves so far this year to support the peso, which fell as much as 0.9% on Thursday to a new record low of 58.5 per dollar.

BSP will respond to exchange rate fluctuations to the extent that it impacts inflation, Deputy Governor Francis Dakila said at a briefing after the rate announcement.

The currency pressure isn’t “unique to the peso,” Dakila said. While the BSP doesn’t target a particular peso level, it is ready to participate in the foreign-exchange market to guard against excessive volatility.