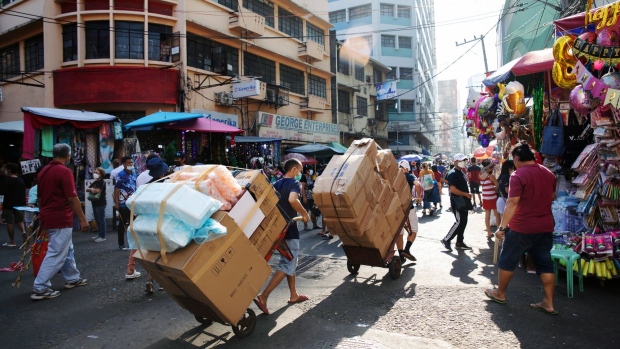 Workers carry boxes on trolleys past stalls at Divisoria Market in Manila, the Philippines, on Sunday, Dec. 5, 2021. The Philippines had loosened virus restrictions in recent weeks as Covid-19 infections declined but with the emergence of the virus variant however, Metro Manila will remain under Alert Level 2 to December 15 and the Southeast Asian nation has rolled back its reopening totourists. , Bloomberg

(Bloomberg) -- The Philippines has increased the minimum daily wage in the capital Manila and neighboring areas by 33 pesos ($0.63) to counter rising prices.

The increase boosts the rate to 570 pesos a day for employees in the non-agricultural sector and to 533 pesos for agricultural workers, the Philippine Labor Department said in a statement.

The adjustment will “protect around one million minimum wage earners” from “undue low pay” and restore “purchasing power of minimum wage earners” after the escalation of prices for basic goods, commodities and petroleum,” the department said. The region’s last daily wage increase was in November 2018, it said.

The move comes as the government tries to contain inflation, which quickened to 4.9% in April, the fastest pace since December 2018, on higher prices of basic commodities. Central bank Governor Benjamin Diokno said earlier this month that supply disruptions have contributed to inflationary pressure and warranted “closer monitoring” for timely intervention to prevent potential second-round effects.

The daily wage rate and minimum monthly salary were also raised in Western Visayas,central Philippines, the department said, adding that this would benefit around 375,000 workers.

The wage adjustments will be submitted for review and take effect 15 days after publication, the department said.