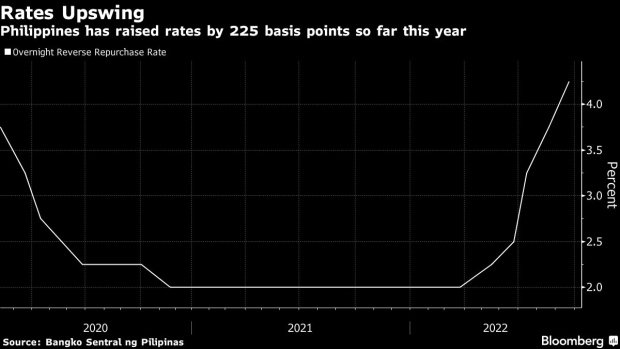 An angler fishing at Harbour Square near the Bangko Sentral ng Pilipinas headquarters complex in Manila, the Philippines, on Tuesday, Dec. 14, 2021. The Philippines slightly raised its economic growth outlook for 2021 and forecast narrowing fiscal deficits in the next years, as it expects to sustain the recovery momentum amid easing mobility curbs. Photographer: Veejay Villafranca/Bloomberg , Bloomberg

(Bloomberg) -- The Philippine central bank is considering stronger interventions and curbing excess peso liquidity to stem currency losses, as it signaled more rate hikes depending on the Federal Reserve’s action.

“Strong dollar is requiring us to have bigger policy rate increases,” Governor Felipe Medalla said in an interview from New York with Bloomberg Television’s Shery Ahn and David Ingles hours after delivering a half-point increase. “If not for the effect of the Fed policy on the peso, we would have been doing 25 (basis points) instead of 50,” he said referring to Thursday’s hike.

As the peso plummeted to a fresh record low this week, Medalla said the central bank has been “quite active, possibly we’ll be even more active” in foreign exchange intervention. Another option is for central bank to reduce local currency liquidity by borrowing more through its weekly auctions so there will be “less pesos to chase those dollars,” the governor said.

The Fed’s hawkish rhetoric on controlling inflation has piled pressure on Asian currencies, including the Japanese yen and the Korean won, while economies facing a current-account deficit are particularly vulnerable to a sell-off. The Philippines expects the gap in current account to widen to a record equivalent to 5% of gross domestic product this year.

Japan Intervenes to Support Yen for the First Time Since 1998

The Philippines was one of three Southeast Asian nations to raise borrowing costs Thursday, bringing cumulative hikes by Bangko Sentral ng Pilipinas this year to 225 basis points, including an out-of-cycle 75-basis-point increase in July.

Asked whether another out-of-schedule rate hike is an option, Medalla said: “I won’t take it off the table but I won’t consider it as a main scenario.”

The central bank had stepped up its intervention “because peso volatility is actually now much higher,” the governor said.

While elevated price growth is weighing on consumption, the economy is still seen as among Asia’s bright spots, suggesting space to further tighten monetary policy. Medalla sees inflation returning to within the central bank’s 2%-4% target by the middle of next year, predicting it will be closer to 3% than 4%.

Philippine economic managers including Medalla have been joining President Ferdinand Marcos Jr. in international trips this month, in part to woo investors. Earlier this week, Marcos touted the Philippines as “vibrant economy,” as his government gears for an ‘A’ credit rating in the medium-term.

“We are very conscious about what the Fed is doing, but we don’t think it’s wise to match it point by point,” Medalla said. “Clearly, the Fed’s policies have affected our choices.”