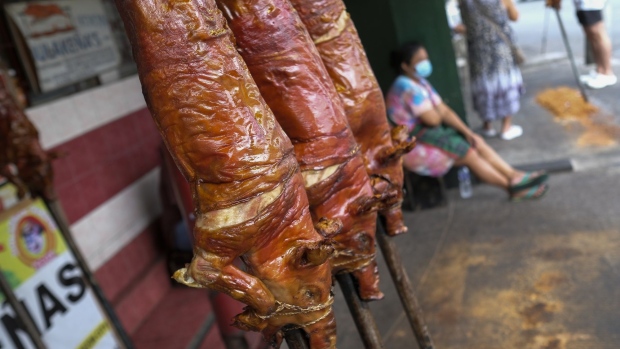 A customer pays for pork at a roadside market stall in Mandaluyong City, Manila, the Philippines, on Sunday, March 14, 2021. The Philippines is considering tripling imports of pork and has placed a cap on prices after the African swine fever cut supplies of one of the nation's most popular foods. , Bloomberg

(Bloomberg) -- The Philippines will end a two-month price ceiling on pork products sold in the capital region as more supplies arrive.

Pork prices soared to as much as 440 pesos ($9) a kilo in January from 240 pesos as the African swine fever and alleged profiteering by traders cut supplies, driving inflation in February to its fastest pace in more than two years.

The Department of Agriculture will set suggested retail prices on imported pork and will calibrate their arrivals to prevent a sharp drop in prices which could hurt local producers, Dar said.

Prices will likely range between 320 pesos and 350 pesos a kilo once the ceiling is lifted, and could still drop as more supplies arrive, Trade Secretary Ramon Lopez said at the same briefing.

President Rodrigo Duterte on Wednesday signed an order that will temporarily lower tariffs on imported pork for a year to boost supply. In March, he asked Congress to increase the cap on pork imports purchased under lower tariffs by 350,000 metric tons on top of the 54,210 tons agreed under the terms of the World Trade Organization.