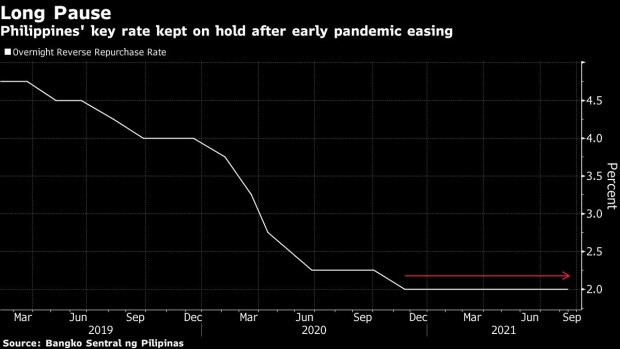 A member of the Philippine National Police checks the identification of motorcyclists crossing the border from Rizal Province into Quezon City, Metro Manila, the Philippines, on Friday, Aug. 6, 2021. The Philippines capital region is under a strict lockdown called enhanced community quarantine, most businesses are shut and only essential shops like supermarkets and pharmacies can fully operate. Photographer: Veejay Villafranca/Bloomberg , Bloomberg

(Bloomberg) -- The Philippine central bank is expected to continue holding its key interest rate steady as restrictions on movement are slowly being eased to boost a flagging economy.

Bangko Sentral ng Pilipinas will leave its benchmark rate at 2% for a seventh straight meeting Thursday, according to 21 of 22 analysts in a Bloomberg survey. One predicted a 25 basis point reduction.

The Philippines is among Southeast Asian nations slowly easing restrictions put in place to contain coronavirus breakouts, moving away from harsh lockdowns that have devastated economies. The country recently reopened dining-in and personal care services in Manila in a limited capacity to support the consumption-driven economy.

Economic managers see the country’s gross domestic product returning to its pre-pandemic level only by the end of next year or early 2023. That suggests the central bank will have to maintain monetary support in some form, even as consumer prices rise at their fastest pace since December 2018.

“We expect BSP to keep the policy rate unchanged and maintain its accommodative policy stance,” said Jonathan Koh, economist at Standard Chartered Plc in Singapore. A still weak economic backdrop would mean policy makers will look through the recent spike in consumer prices, he said.

Here’s what to look for in Thursday’s announcement:

Analysts are keen to know how the government’s shift away from strict, widespread lockdowns affects the BSP’s economic growth view, as that may provide clues to the duration of easy policy and whether there’s need for further monetary support.

The Philippines “will need at least a year and a half to get back just to pre-Covid levels of GDP,” said Nicholas Mapa, economist at ING Groep NV in Manila. “BSP will likely be on hold at least through much of next year, with a rate hike only considered perhaps in the second half of 2022 or when palpable signs of the recovery emerge.”

Governor Benjamin Diokno told Bloomberg last month that the BSP can keep policy loose until both gross domestic product growth and the jobless rate settle around 6%.

Policy makers are expected to announce updated inflation forecasts Thursday, with central bank watchers focused on the outlook for the next two years.

“We think BSP will look through a likely string of above-target CPI readings in the near term. A large negative output gap and fading base effects should pull inflation back into range toward year-end.”

Diokno has said the bank will maintain its easy policy to the extent inflation allows, while describing recent price pressures as transitory. The BSP sees inflation easing toward the midpoint of its 2%-4% range next year and in 2023. CPI rose 4.9% last month.

With a shaky recovery needing as much support as it can, economists at Capital Economics Ltd. say the central bank will soon cut rates -- perhaps even on Thursday.

“A spike in inflation in the Philippines means that Thursday’s decision will be a close call,” Capital Economics’ Gareth Leather and Alex Holmes wrote in a note Sept. 17, but concluded that “the deteriorating economic outlook following a surge in virus cases will be a bigger concern.” The pandemic has dealt a serious blow to the economy, which remained about 9% below pre-crisis level in the second quarter, they wrote.

Still, the consensus is that any further monetary policy easing may do little to boost weak business and consumer sentiment, compared to the boost from keeping virus infections at bay and reopening the economy.

Even a cut to lenders’ reserve requirement ratio -- which the BSP last month said is “on the table,” depending on economic and credit conditions -- is now widely seen as unlikely anytime soon.