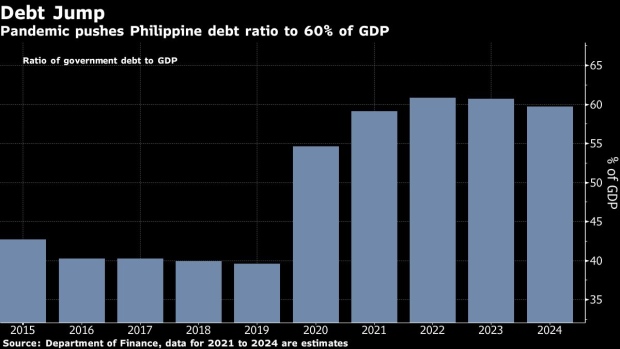 (Bloomberg) -- The Philippines is targeting individuals in its domestic market for the first time with a dollar bond offering as it seeks to expand funding from that lucrative investor pool.

The government is set to price a minimum of $200 million each of five-year and 10-year retail dollar bonds on Wednesday, according to the nation’s Bureau of the Treasury. While the debt offering is small compared with the $3 billion of notes priced by the government overseas in June, individual investors are becoming a stalwart source of funding for the Philippines. The sovereign raised about $9 billion from a sale of peso-denominated retail bonds in March.

“Retail dollar bonds could become a regular debt instrument, given the large number of dollars held by Filipinos, many of them in savings deposits,” said Ed Francisco, president of BDO Capital & Investment Corp., one of the deal’s issue managers.

The move comes as a discussion of reduced bond purchases by the Federal Reserve pushes up borrowing costs in emerging markets, with investors weighing the prospect of higher U.S. interest rates ahead. A less-than-forecast increase in U.S. inflation on Tuesday, however, was seen as giving the Fed more flexibility when it comes to pulling back on stimulus.

The yield on the Philippine’s 10-year local bond traded near a four-month high this week. The Philippines plans to borrow a record 3.1 trillion pesos ($62 billion) from domestic and international sources this year and about 2.5 trillion pesos next year.