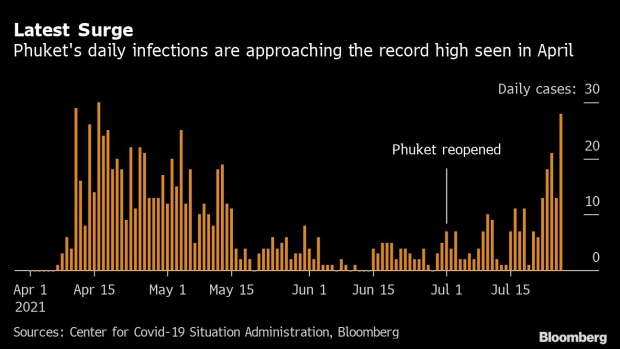 A vendor takes down umbrellas at the end of the day at the near-empty Patong Beach in Patong, Phuket, Thailand, on Monday, July 19, 2021. In a precursor to the broader opening, vaccinated tourists were this month allowed to travel to the resort island of Phuket without needing to quarantine in the so-called Phuket Sandbox experiment. , Bloomberg

(Bloomberg) -- A flareup in coronavirus cases in Phuket, Thailand’s first tourism hotspot to waive quarantine for vaccinated foreign visitors, is threatening to scuttle the experiment seen as a model for other tourism-reliant nations to reopen borders.

The resort island reported 125 new Covid-19 cases during the week ending July 27, higher than the government-set threshold of 90 weekly cases that could trigger a temporary suspension of the program. In response, local authorities closed public schools and shopping malls and banned gatherings of more than 100 people from Tuesday to stem the virus from spreading further.

The majority of new cases were among local residents, and all the high-risk contacts on the island have been isolated to prevent further spread, officials said. Only 26 vaccinated visitors out of the more than 11,800 have tested positive for the virus since the so-called Phuket Sandbox was launched on July 1, they said.

The Covid resurgence in Phuket mirrors the situation elsewhere in Thailand and the broader Southeast Asian region, where authorities are struggling to contain the spread fueled by the more contagious delta variant. Any setback to the Phuket quarantine-free travel would hurt Thailand’s plan to expand the model to more islands and beach resorts to rescue its vital tourism industry.

It may still be too early to suspend the Phuket model as authorities are watching for more signs of a wider spread of infections. About 70% of Phuket’s population are fully inoculated, compared to about 5% nationwide, official data showed.

“We’re entering a tightening mode and reducing local activities on the island, but we have several circuit breakers in place before there’s a suspension to the reopening program,” said Thaneth Tantipiriyakij, president of the Tourism Council of Phuket. “With the surge in infections, our focus right now is to assess the situation day-by-day and week-by-week.”

Thailand has seen an unprecedented surge in Covid infections and deaths after the emergence of a third wave in early April. The nation’s key economic centers, including Bangkok, have been put under strict rules prohibiting inter-provincial travels and curbing most business operations.

Besides the 90 weekly-case limit, other triggers for Phuket Sandbox suspension include the detection of infections in all three districts on the island or more than six sub-districts, the identification of more than three clusters, the uncontrollable spread of new variants, and the use of 80% of the hospital capacity.

Authorities will first restrict the travel routes or put in place a temporary ban on tourists leaving hotels before considering a total suspension, according to Thaneth. Officials will review the the situation in coming days and decide if additional tightening measures are needed, he said.