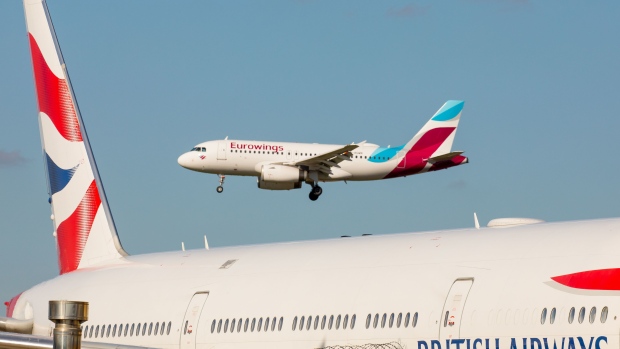 A passenger aircraft operated by Eurowings GmbH passes over a passenger aircraft operated by British Airways, a unit of International Consolidated Airlines Group SA (IAG), sitting on the tarmac at London Heathrow Airport, London, U.K. on Monday, March 16, 2020. Airlines worldwide will shrink operations to only a trickle of flights, severing global links and putting hundreds of thousands of jobs at risk as they fight to preserve cash and survive the coronavirus pandemic. Photographer: Jason Alden/Bloomberg , Bloomberg

(Bloomberg) -- Pilots at German discount carrier Eurowings will vote on possible strike action after failing to reach a deal with the airline on jobs.

The Vereinigung Cockpit union said the ballot was being conducted after several rounds of discussions with management of the Deutsche Lufthansa AG unit. The parties failed to make progress on relieving the burden on a depleted staff as travel demand rebounds, the union said on its website. The ballot runs until Aug. 31.

A faster-than-expected recovery in travel has clashed with a shortage of staff at airlines and airports after deep cuts during the pandemic. That’s brought a summer of chaos for the industry, with Lufthansa and other carriers cancelling thousands of flights.

Last month, Lufthansa said it had sealed a wage deal with the Verdi labor union that represented 20,000 of its ground crew. Wage increases ranged from 13.6% to 18.6% after a warning strike led to hundreds of cancellations at the carrier’s Munich and Frankfurt hubs.

The Eurowings ballot is not a decision to strike or end talks, but a means to reach a solution through negotiations, the VC union said.