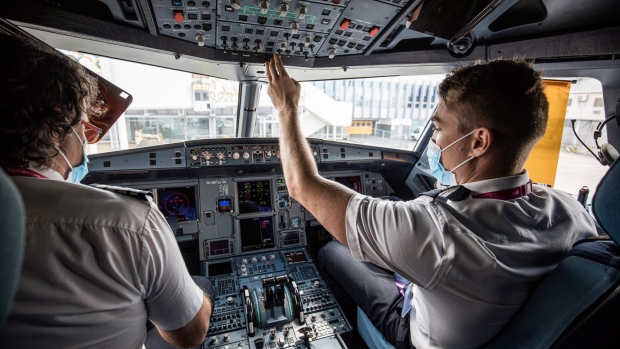 A pilot, left, and first officer wear protective face masks as they run through pre-flight checks in the cockpit on-board a passenger aircraft operated by Wizz Air Holdings Plc at Liszt Ferenc airport in Budapest, Hungary, on Monday, May 25, 2020. Wizz Air is plotting a major expansion at London Gatwick airport as rival carriers pull back, paving the way for the Hungarian low-cost carrier to emerge from the travel downturn with a bigger presence in the world’s busiest city for passenger traffic. Photographer: Akos Stiller/Bloomberg , Bloomberg

(Bloomberg) -- Airlines need to adopt more robust pilot training to prevent accidents when pilots must manually take over during emergencies or are confused by automated flight systems, US regulators said Tuesday.

The Federal Aviation Administration published what is known as an advisory circular on its website with extensive new training guidelines for carriers and other commercial aviation operators in the US.

The new cockpit curriculum was prompted in part by the 2013 crash of an Asiana Airlines Inc. jet in San Francisco after confusion about the plane’s automated controls led the pilots to slam into a sea wall, killing three people. Afterward, the National Transportation Safety Board recommended the FAA convene a panel of experts to improve training.

Multiple crashes have shown a need for pilots, who might switch on the autopilot soon after takeoff, to sharpen their abilities to fly without automation in case they have to take over during an emergency, the FAA said in the advisory.