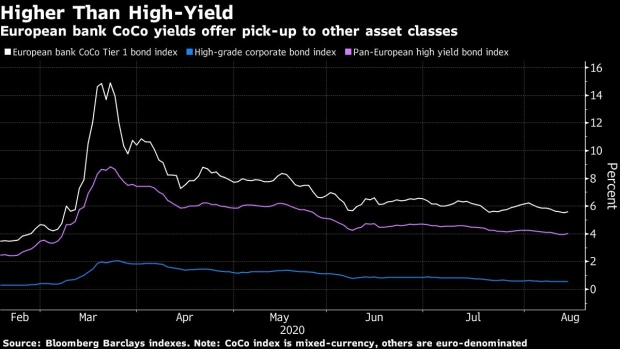 (Bloomberg) -- Managers from Pacific Investment Management Co., Amundi SA and BlueBay Asset Management LLP are sticking with, or even adding to, bets on banks’ CoCos, after prices of the bond-stock hybrid whipsawed during the pandemic.

Initial fears about the economic wreckage wrought by the coronavirus sent prices into free-fall in March, pushing yields close to a record 15%, according to a Bloomberg Barclays index. Since then the bonds, which are also known as Additional Tier 1 debt, have recovered to about 5.6%, rewarding portfolio managers that bought more of them during the market volatility.

The securities’ appeal lies in their higher-than-average interest to compensate investors for the risk of holding notes that stand first in line for losses if the issuer goes bust. In an era of central bankers keeping growth on life support with base rates at, or even below, zero, more investors are prepared to consider buying them.

At the same time, they’re not as risky as they once were. A decade-long drive by banks to build up capital buffers to absorb losses after the 2008-2009 financial crisis, has also attracted investors.

“AT1s of European banks still look incredibly cheap,” said James MacDonald, a co-manager of BlueBay’s $1.16 billion Financial Capital Bond Fund, which invests in the bonds. “Banks have become much safer since the previous crisis, and that’s not fully reflected in spreads yet.”

European banks are now benefiting from emergency steps by central banks and governments to mitigate the impact of the pandemic and put economies back on a recovery footing. That’s helped Common Equity Tier 1 ratios for Europe’s lenders, a measure of how big their capital cushions are in relation to the risk on their balance sheets, jump 50 basis points during the second quarter, according to Bloomberg Intelligence.

Laurent Crosnier, chief investment officer of Amundi (UK) Ltd, which has 47 billion pounds ($61.5 billion) of assets under management, said the very distressed prices seen during the rout earlier this year were “a signal to keep and to reinforce” its positions in subordinated debt, including AT1s.

Valuations are still attractive as “this ongoing search for yield and quality” is likely to underpin performance in the future, said Crosnier. Euro investment-grade company bonds yield just 0.57%, about 10 times less than the mixed-currency European CoCo index.

Other investors are giving the sector a wide berth, however, given the lack of clarity over how the longer-term impact from the crisis may inflate loan losses and erode capital buffers. That could rekindle fears over AT1 coupon cancellations, even after regulators ruled out a blanket ban.

Still, Europe’s major banks have generous cushions over their minimum capital requirements which leaves AT1 investors in a “very comfortable position”, said Sebastiano Pirro, who manages the Algebris Financial Credit Fund. As of June 2020, more than half of the 5.4 billion-euro ($6.4 billion) fund was invested in AT1 debt.

“Banks have been running buffers on top of buffers, for creditors to feel protected,” said Pirro. “AT1 now looks very good compared to everything else in credit.”