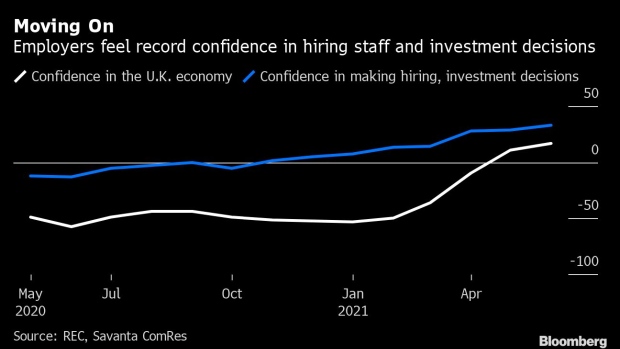 (Bloomberg) -- U.K. businesses are reporting record confidence but struggling to hire staff, with coronavirus self-isolation rules contributing to severe labor shortages, according to the Recruitment and Employment Confederation.

The report published Wednesday is the latest to warn of the potential threat to the recovery from workers forced to stay at home after being “pinged” by the National Health Service Covid-19 tracing app amid a new wave of infections.

The disruption, together with a reluctance among workers to change jobs in the wake of the pandemic, is causing “serious staff shortages” and forcing companies to improve pay and other benefits as the economy gets back to normal.

“Recruiters are working harder than ever to hire the right people for the right roles,” said Kate Shoesmith, deputy chief executive officer of the REC. The Savanta ComRes survey of 600 employers from April 1 to June 30 found:

Wage pressures will be one of the factors under discussion when Bank of England officials meet to set monetary policy next week. Pay increases risk making higher inflation more entrenched, though Deputy Governor Ben Broadbent says that labor shortages are likely to ease as government wage support for furloughed workers is phased out.