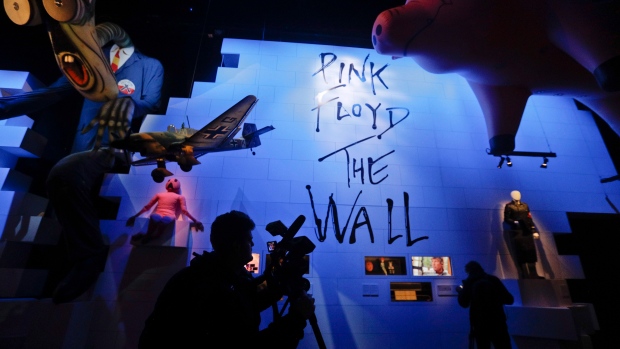 Journalists film with their cameras an installation part of the Pink Floyd Exhibition: "Their Mortal Remains", in Rome, Tuesday, Jan. 16, 2018. , Gregorio Borgia/AP Photo

Members of the rock band Pink Floyd are seeking at least $500 million in a deal for their music catalog, according to people familiar with the talks, which would be one of the largest sales in music history.

The group known for hits such as “Money” and “Comfortably Numb” is selling its recording and songwriting catalog, as well as the power to create merchandise based on the band, said the people, who asked not to be identified because the talks are confidential. Patrick McKenna, who is representing the band in the process, didn’t respond to an email seeking comment.

McKenna has winnowed the list of potential buyers to four, said the people. The names include Warner Music Group Corp., Sony Music Entertainment and BMG. Sony and Warner already distribute some of Pink Floyd’s music.

The British rock band released some of the most popular records ever, including “Dark Side of the Moon” and “The Wall,” two albums that defined music in the 1970s. The group has sold 75 million records in the US, the 10th most of any artist, according to the Recording Industry Association of America.

Many famous musicians have cashed in on a frothy market for song catalogs in recent years, capitalizing on interest from both music companies and financial firms. Bob Dylan sold his recordings to Sony Music in a deal estimated to be worth more than $150 million, and his song catalog to Universal Music in a deal for between $200 million and $300 million.

Investors are starting to grow wary of shelling out for music portfolios due to rising interest rates and uncertainty about the economy. But demand has held steady at the very top of the market.

Getting all of the members of Pink Floyd to agree on anything has been a challenge for decades. The band formed in 1965 under the direction of then lead singer Syd Barrett, who left three years later. Singer and bassist Roger Waters left the band in 1985 and later sued his fellow band mates over their use of the name. Waters and the rest of the crew have squabbled over the years as the band, led by guitarist David Gilmour, continued to release records.

That is a big reason they chose McKenna, who runs the UK-based advisory group Ingenious Media, to guide them through the process.