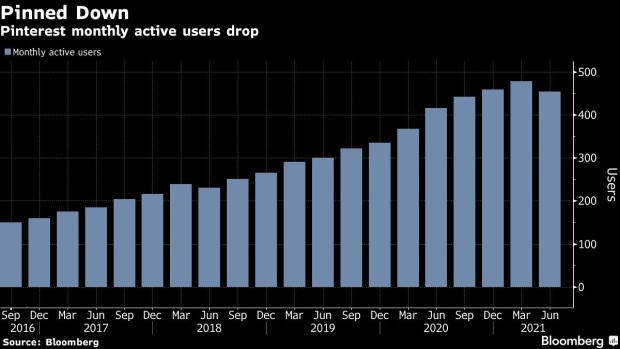 (Bloomberg) -- Pinterest Inc. tumbled the most in sixteen months Friday after reporting fewer users logging into the visual search service in the second quarter.

The company said it had 454 million monthly active users in the last quarter, fewer than analysts had estimated and down from 478 million in the first three months of the year, signaling its pandemic-fueled surge has come to an end. Pinterest didn’t give a forecast of MAUs for the third quarter, citing “the evolution of the Covid-19 pandemic and related restrictions,” which remain unknown. The shares fell as much as 18%, the most since March 2020.

Still, ad spending by retailers on the site didn’t seem to slow. Revenue more than doubled to $613.2 million last quarter and Pinterest also swung to a profit of $69.4 million from a loss of $100.8 million a year ago.

While the results beat expectations, there are concerns about user trends, given the “significantly” greater-than-expected decline, analysts at Robert W Baird & Co. wrote in a note to investors.

Pinterest, a visual search service where users can save, collect and group images by themes and ideas, was a prime beneficiary during the pandemic, along with other apps with shopping features like Facebook Inc.’s Instagram and Snap Inc. Advertisers flocked to the sites to woo a captive audience that embraced a shift to e-commerce.

“There was a lot of activity around home decor, gardening, cooking, crafts or DIY,” Chief Financial Officer Todd Morgenfeld said in an interview. “As restrictions began to ease, those use cases are less relevant right now.’

During the most recent quarter, San Francisco-based Pinterest introduced new tools to help creators make their Idea Pins shoppable and a new video format, moving into the turf of Instagram and TikTok. These new features were anticipated to boost user activity. The company said “shopping engagement remains resilient,” and that it believes users will be increasingly attracted by short-form video or Idea Pins.

“Our plan is to launch seamless on-platform transactions by the end of the year,” Morgenfeld said. “We have been able to allow users to shop, but they’ve typically transacted off-platform,” finding something they want to buy and then going to a different website to make a purchase.

Pinterest said it expects revenue growth in the low 40% range in the third quarter and that operating expenses will grow “modestly” quarter-over-quarter as it plans to resume its brand marketing campaign early in the fourth quarter.