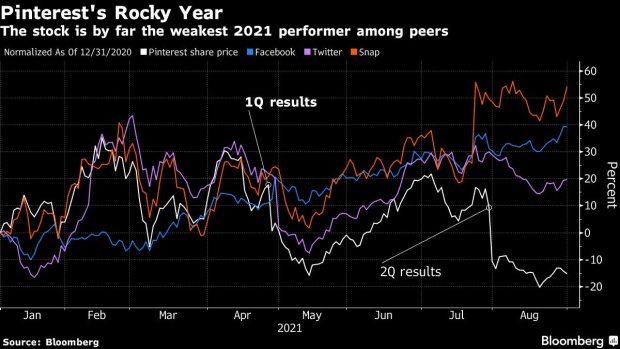 The Pinterest Inc. application is displayed on an Apple Inc. iPhone in this arranged photograph taken in Little Falls, New Jersey, U.S., on Saturday, Feb. 23, 2019. Pinterest has filed paperwork with the SEC for an initial public offering (IPO), the Wall Street Journal reports, citing unidentified people familiar with the matter. , Bloomberg

(Bloomberg) -- Pinterest Inc. was the hottest social-media stock of 2020, but Wall Street is growing cautious after a couple of disappointing quarters sowed doubt that new pandemic-era users will stick with the platform.

People turned to Pinterest while isolating at home last year, leading to a jump in users, along with greater online commerce and advertising spending. But that tailwind -- which fueled a 254% rally in 2020 -- appears to be waning as the economy reopens, with the number of active Pinterest users dropping in the second quarter.

Both of the company’s past two quarterly reports have been met with double-digit stock price declines, and on Monday Argus Research downgraded the stock, becoming at least the third firm to do so since the second-quarter release on July 29.

Despite the weaker view, none of the firms that cover Pinterest recommend selling the stock, according to data compiled by Bloomberg. Every other social-media name has at least one bearish analyst. In addition, the average analyst price target suggests the stock can rise more than 30%, a much stronger return potential than the other social-media names.

Mitch Rubin, manager of the RiverPark Long/Short Opportunity Fund, is among the investors who maintain a positive long-term view on the stock. In a phone interview, he said the focus on monthly active users should be secondary to the company’s ability to monetize the 450 million-plus user base it has now.

Average revenue per user is a more important metric, he said, and while Pinterest’s ARPU lags well behind peers, Rubin expects the company will be able to close this gap as advertisers recognize that users are commerce-focused when on the site.

The company is expected to generate average revenue of $1.37 per user in its third quarter, according to Bloomberg Consensus estimates. In comparison, Snap is seen making $3.63 in ARPU, while Facebook’s worldwide ARPU is estimated at $10.23. Twitter is expected to make $5.42 in advertising revenue per daily active user.